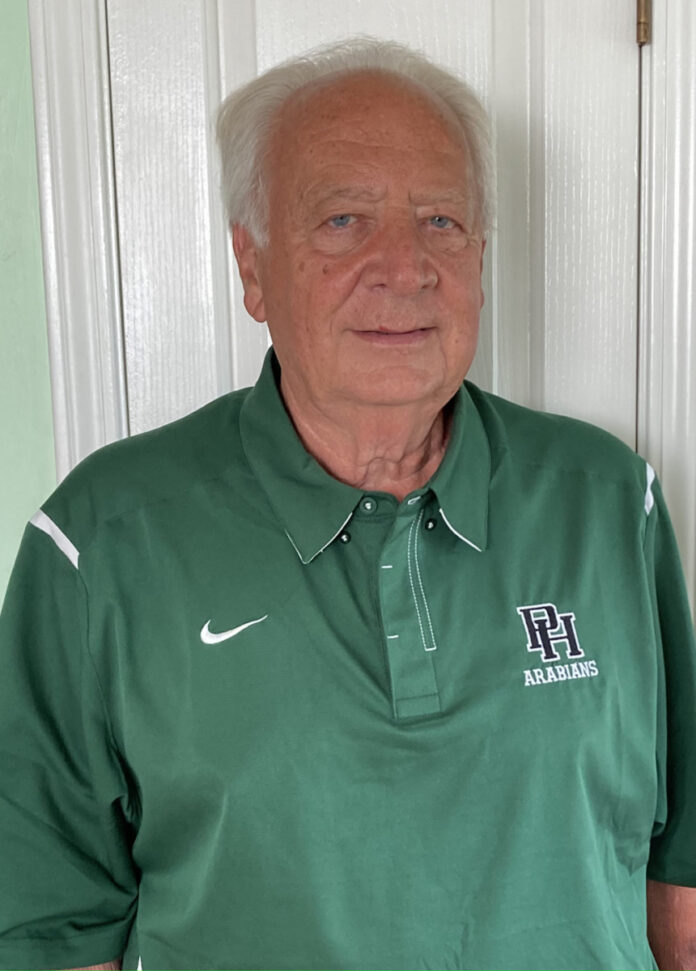 PENDLETON — Pendleton Heights cross country coach Alan Holden is set to receive another honor for his successful and ongoing career. Holden will be inducted into the Eastern Hancock Hall of Fame Friday, Sept. 17, during halftime at the Eastern Hancock-South Putnam game.

Holden attended Charlottesville High School and graduated in 1963, a few years before the consolidation that became Eastern Hancock.

Charlottesville High School had only four sports: baseball, cross country, track and basketball. And none were for girls.

At Charlottesville, Holden was a multi-sport athlete and received 13 of a possible 16 varsity letters, including track, cross country, baseball and basketball. He held the school record for the mile, half mile and quarter mile and won the Hancock County individual title in cross country. Charlottesville did not even have a track until Holden was a junior. Prior to that, the team ran the fields and roads in the surrounding areas. When the school installed a track, the surface was cinder.

While on the diamond, Holden maintained a .500 batting average. At the time, cross country and baseball were fall sports and Holden remembers he and other teammates running a meet in the morning and changing into baseball uniforms to play a game right after.

Holden was recruited by and attended Western Kentucky University, which at the time was the No. 1 cross country team in the south. Recruiters came to him and seeing the cinder track he ran on were amazed at his accomplishments. At WKU, he received four letters in both cross country and track and was named all-conference in both track and cross country.

Wanting to continue to be involved, Holden is now in his 35th year of coaching cross country for Pendleton Heights. He’s has coached many championship teams. His Arabians have garnered 18 Madison County championships, 15 conference titles, nine sectional and six regional titles. Additionally, the Arabians have appeared in 23 semistate races and 14 state races with 40 runners through the years making the competition. Seven of his runners were named All-State and one Brock Hagerman in 2005, was the individual Indiana state champion.

A mention of the Hall of Fame happened a few years ago when a cousin and school alum talked about getting the ball rolling. However, the gathering of stats and records never quite came to fruition until recently.

Holden said Fred Powers, who is the grandfather of senior runner Avry Carpenter, brought an old yearbook to practice last year. Powers was a classmate of Holden’s and graduated a few years after him. He showed Holden’s sport photos and talked to the team about not only Holden but about hard work and being a team. Holden calls Powers his spirit leader of the team. April King, Holden’s daughter, was there as well, and the conversations turned into King researching and putting all of Holden’s accomplishments into a letter she sent to the selection committee at Eastern Hancock last year.

Eastern Hancock Hall of Fame had its first induction in 2008. Normally, the event is in January during a basketball game, however, the class of 2021 was pushed to this fall because COVID-19 protocols last January prevented full attendance for the event.

The induction committee is made up of boosters, two varsity coaches and an administrator.

While Holden has had many accolades over the years, Holden is still excited about the Hall of Fame.

“It’s an honor to be recognized.”

To this day, he believes participating in more than one high school sport is important.

“I tell the kids you can keep your focus by always being involved. I’m a supporter for all sports,” Holden said.