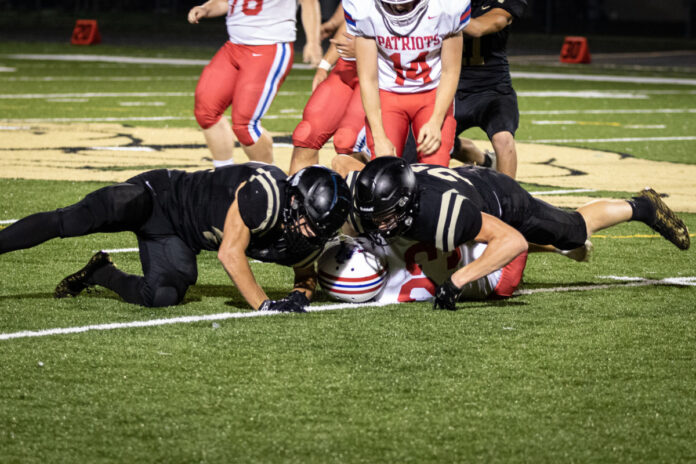 LAPEL — Welcome home, Bulldogs.
After playing on the road three consecutive weeks, Lapel’s football team returned to The Boneyard.
It gave the hometown fans a great performance, the team’s first shutout for head coach Tim Miller, who took over the program in 2012.
Lapel improved to 6-2 with a 35-0 win against Class 4A Jay County on Friday.
It was the program’s first shutout since an Oct. 24, 2008, opening-round sectional tournament victory over Eastern Hancock, 22-0.
“Defensively, the line, secondary and linebackers, that’s about as fast as I’ve seen them move this season. Hopefully we can build on that,” Miller said.
“The boys played really well Friday. They came out of the gates super physical. I think (Jay County) may have had only one first down in the first half. Defensively, we were stopping them cold.”
It was a great bounce-back performance after suffering a 48-21 loss at Class 2A No. 5 Heritage Christian, a game that was tied at halftime, 21-21.
Against Jay County, Lapel took care of business early, leading 35-0 at halftime. The Bulldog reserves played in the second half.

Along with the strong defensive performance, junior running back Tyler Dollar was big in determining Friday night’s final results.
Dollar had seven carries for 188 yards and four touchdowns.
Quarterback Brennan Stow completed 8 of 11 passes for 83 yards and one touchdown. Backup quarterback Luke Alexander was 4 of 6 for 48 yards.
Receiver William Alexander had two catches for 20 yards and a touchdown.
The 12 total receptions were divided among seven receivers.
Linebacker Coleton Kadinger had nine tackles, including three tackles for loss. Linebacker Kyle Shelton also had nine tackles.
Jay County dropped to 3-5 with the loss.
The Bulldogs finish their regular season at home Friday, Oct. 15, against Eastern Hancock. The Royals are 5-3 on the season and are coming off a big win over Shenandoah, keeping them in the race for a Mid-Eastern Conference title with both Shenandoah and Monroe Central.
“Eastern Hancock is a rival and having a win and playing well, especially after the second-half letdown at Heritage Christian, is big. It’s a big game because of the momentum going into the postseason.
“The last several times we’ve played them, they have always been really good games. We’re expecting that on Friday.”
Lapel won last year’s game in Charlottesville, 39-21. The Bulldogs trailed 21-19 at halftime.
Miller added that a key to beating the Royals will be to stop their running attack and the ability to use his club’s depth.
“We have to be able to run the football ourselves,and we have to be able to use our depth,” Miller said. “We run a lot of no-huddle (offense) and play a lot of guys one-way. We need to use that to our advantage.”