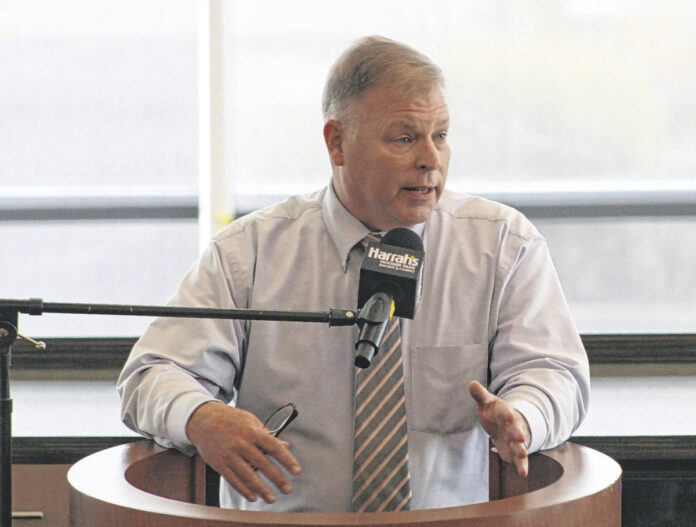 ANDERSON — The common topic from South Madison County leaders speaking at the 2021 State of the County was growth.
It was the second time the Madison County Chamber had organized the event, held at Harrah’s Hoosier Park in Anderson, which brings Madison County leaders together to talk about areas they govern.
The previous event took place in 2019.
Last year’s event was canceled due to the coronavirus pandemic. Last week’s gathering — which featured an appearance by Gov. Eric Holcomb — was originally scheduled for earlier in the year, but was also postponed because of pandemic concerns.
“It’s an exciting thing to be able to come here and talk about Lapel (and its impending growth),” Lapel town council president Chad Blake said of his opportunity to share happenings in his community. “Lapel has had a history of not being proactive. We want to be ready.”

Blake spoke about the town’s creation of a comprehensive plan, approved earlier this year, to aid Lapel in being ready for its expected growth.
“This was a great opportunity for networking and meeting some of my counterparts,” Blake added. “This is an event that they could make an entire day out of.”
Pendleton town manager Scott Reske spoke on behalf of the town. Like Blake, he spoke about the forthcoming growth.
“It’s good to hear what the other communities are doing,” Reske said. “Lapel and Ingalls and Pendleton are experiencing the same growth impact. It’s really good when everyone comes together and hears what’s happening.”

Reske talked about the projection of Pendleton’s population. He said with current developments there are 800 housing lots sold or under construction in Pendleton. With the new homes, a conservative estimate would increase the town’s population from 4,500 to 6,000.
Including lots in the annexed area of Pendleton, Reske said he thinks the town’s population could more than quadruple in the coming two decades.
“A lot of people would rather it grow slower, and I’m sort of with them,” Reske added. “We have to assume our population, at some point, we don’t know when — it depends on how fast developers develop, farmers sell farm ground and people buy homes — it will hit 40,000 in 20 years.
“All you have to do is drive around and see developments that have come to the Hamilton County border and are now spilling over to the (Madison County) side. If you go down to State Road 13 and County Road 800 South and CR 900 South, you see what’s happening.”
Frankton, Alexandria, Elwood and Anderson all had representatives of their town/city talk about what’s going on in their communities, too.
A statement was read on behalf of Ingalls, Edgewood and Chesterfield.
Like Lapel and Pendleton, the Ingalls statement keyed on the approaching growth of its community.
“It’s good to hear that our partners in the southern part of the county, Ingalls and Lapel, we’re all experiencing the same thing,” Reske added. “It’s just good to hear that confirmation. It’s always good to know you’re not the only one. It’s really good to know what’s going on in other parts of the county, and I think it’s good for them to hear what’s happening to us, because they are next. Edgewood will probably be next, then Markleville and the southern part of Anderson.”
The event opened with lunch followed by an introduction and conversation with Holcomb, led by Madison County Chamber of Commerce President and CEO Clayton Whitson.
Holcomb and Whitson discussed pandemic-
related issues, infrastruc-ture improvements, statewide labor workforce and jobs programs, and other subjects related to Madison County and the state.

The name says it all