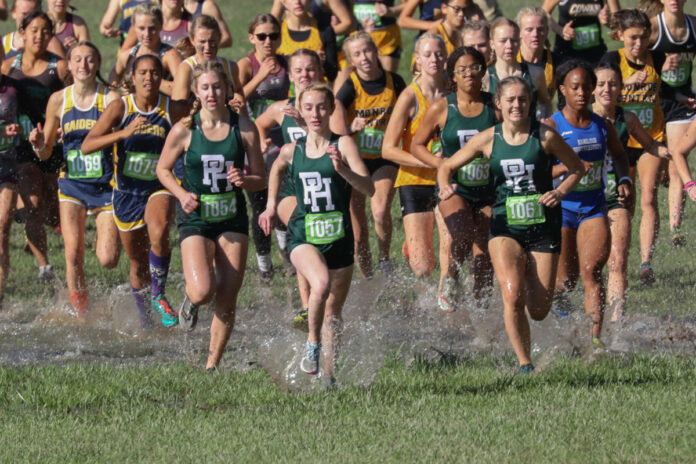 MUNCIE — Arabians freshman Ava Jarrell led the Pendleton Heights girls cross country team as the team finished third in the Delta regional and will advance to semistate competition.
Jarrell ran the soft rain-soaked course in 21:26, placing ninth. Senior teammate Laney Ricker was 11th with a time of 21:33; freshman Hadley Walker was 15th (22:00); and senior Berkeley Lord was 25th (22:32). Sophomore Abigail Davidson was the fifth Arabian to score with a 30th place finish in 22:47. Julieanne Spejewski, Jaycee Thurmon and Ella Dixon also ran for the Arabians.
Lapel’s Hannah Combs finished 34th at regional with a time of 23:03. Fellow Bulldog Ashlynn Doster posted a 27:36.
Hamilton Southeastern (45) and Fishers (51) were first and second in the regional, repeating their performance from the Pendleton sectional, where the Arabians (80) also placed third to earn their way to the regional race.
At sectional, four of the five Arabians runners placed in the top 20 to give them a score of 71, behind winner Hamilton Southeastern, who had 22; and Fishers, who scored 59.
Lapel advanced two runners out of the sectional but did not place in the top five teams. Blue River Valley and Shenandoah were the fourth and fifth teams to advance.
Jarrell was the top sectional finisher for the Arabians. She placed sixth with a time of 20:37. Behind her in eighth place was Ricker with a time of 20:57. Lord was 15th with a time of 21:43, while Spejewski was 18th with her time of 22:05. Davidson was 25th with a time of 23:19.
“We weren’t too far behind Fishers,” said Coach Melissa Hagerman. “I don’t feel like we ran our absolute best, but this week of training and backing off will help definitely.”
Jarrell said her sectional run was a good one for her. “I wanted to make sure to get out and get a good spot and run a good race. I feel like it was one of my better races mentally. I may have not gotten a really good time, but that didn’t matter too much.”
Hagerman said seniors Ricker and Lord had a very good sectional race. “They are really flexing their senior muscles and leading the team like I need them to do.”
Jarrell and Ricker have been the top two Arabians runners for most of the season.
“Laney is the most consistent runner ever,” Hagerman said. “She’s so solid. So if she gets out in the race, Ava’s going to be right there.”
Hagerman said Ricker has been good for Jarrell in her pacing. “Laney challenges her in every practice. She’s been a great training partner.”
For the Bulldogs, who placed seventh overall at sectional, Combs and Doster qualified for the regional race. Combs finished 23rd with a time of 22:53, to advance to regional for a second time, while Doster was 35th with a time of 25:39.
“We’re going to go about what we normally do practice wise and go there and try to get somebody out,” Coach Darrell Richardson said after the sectional race. While the pressure was off for the team scores, Richardson said the pressure was still there. “It’s more pressure on them because they know they have to go there to compete to try to get out.”
The Arabians will make the trek to the New Haven semistate on the campus of Huntington University on Saturday, Oct. 23. The girls race begins at 11:15 a.m.