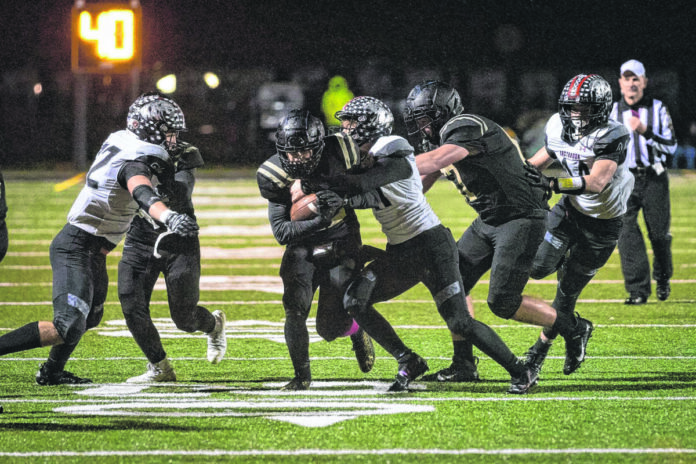 Though Lapel gave a valiant effort, the football team was unable to overcome a formid-able Eastbrook team. The Panthers defeated the ’Dogs 46-13 and ended their sectional run amid constant rain pelting the Bulldogs’ field.
The Panthers showed during semifinal action Friday why they are the No. 1 team in Class 2A football, racking up a 21-0 lead by the end of the first quarter.
The Bulldogs pushed back, hol-ding the Panthers to only one score in the second quarter, but Eastbrook had a 27-0 lead at the half.


“They do what the No. 1 team in the state does. They are a phenomenal football team,” said Lapel coach Tim Miller. “I told our guys this week — all 11 guys on the field are full speed all the time.”
The Bulldogs were without the services of junior running back Tyler Dollar. Dollar dressed but was unable to play due to injury.
“He wanted to. It’s one of those injuries where you just can’t tell,” Miller said. “The will was there, but the body wasn’t responding.”
Dollar was ranked in the top 15 in the state with more than 1,500 yards rushing this season.
In the second half, Lapel got on the board with a rushing touchdown from senior Kyle Shelton and a Rylie Hudson catch in the endzone.
“It’s tough,” Miller said. “Our seniors out there, they were continuing to fight every play. They were keeping their composure, which was awesome to see.”
While the loss ended the season and closed out the careers of 21 seniors, Miller was not down after meeting with the team on field for the final time of the season.
“We graduate a very large senior class. This group has the highest winning percentage over four years of any group that’s ever went through Lapel,” Miller said.
The Bulldogs earned a sectional title in 2018.
Senior quarterback Brennan Stow ended his final season racking up more than 1,600 passing yards and 17 touchdowns.
Miller said the Eastbrook game showed them where they want to be.
“They’re a top five program every year,” Miller said. “We’re hovering between 5 and 15 every year, and we need to take the next step.”
While losing a strong senior group, the Bulldogs will retain the services of not only Dollar but several others who will step into important roles.
“We have a lot of guys coming back. We’re going to be rebuilding in some places and have some guys continue to get better,” Miller said.
Miller told the team the weight room would be closed this week. Then they would get back to work.
“Football is a funny thing because these kids spend the next nine months every day working out, going to weight lifting class for these 11 games.”
“I’m proud of our kids. They work hard,” Miller said.
With an undefeated JV team and a middle school program record of 14-2, Miller said the players have bought into their program.