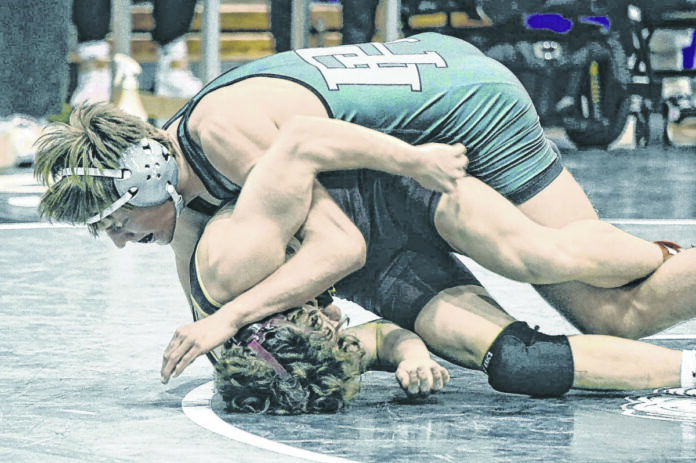 PENDLETON — Regaining the sectional crown is one goal of Pendleton Heights High School wrestlers this year.
After four team titles in a row, the Arabians finished third in the 2021 sectional, and Coach Dave Cloud said it was a little tough not bringing home the title last season.
With the disappointment behind them, and solid practices under their belt, the Arabians have a strong core of experience returning to the mat.
Seniors Ethan Childers and Colin Gillespie were sectional champions last year. They are joined by other past regional qualifiers seniors Elijah Creel, Blake Nicholson and Sam Mossoney.
In addition, Jackson Todd, Eli Libler and Evan Tolliver bring even more experience in their weight classes with Todd being a defending Madison County Champion. Childers, Gillespie, Nicholson and Mossoney were also county champs last season as well.
“Ryan Butler, Jaylon Covington and Chris Crank are back and really worked in the offseason,” Cloud said.
“We have a very solid group back.”
With more than 40 out for the team this year, Cloud said he’s still hoping more will come on board. The Arabians will debut a very large freshman class, with 26 out for the team.
“I’m excited about this group, “Cloud said. “Most of them wrestled in middle school.”
Coach Cloud has seven girls on the team this season. Assistant Coach Katie Kriebel has organized camps and worked on recruiting even more girls to give the sport a try. Girls wrestling may be the next IHSAA-sanctioned sport.
Cloud said the work ethic of youth is tremendous, and they are showing up and doing some surprising things already.
“With the veterans helping, there’s a constant attack motion, and they are doing what it takes to win the big matches. There’s a constant focus.”
Once again, Cloud said the Hoosier Heritage Conference will be a bear fight this year.
With one of the better wrestling conferences in the state, the battle for the HHC title is just about anyone’s game. Cloud said Delta and Mt. Vernon are strong, and New Palestine is getting better and better. Greenfield-Central is also in the mix.
The Arabians face tough competition not only in the HHC, but also in their sectional — getting back the sectional trophy won’t be easy. Noblesville and Hamilton Heights have much of their contingent back to face off in the Elwood sectional in January.
Sectional and HHC laurels aren’t the only title on the Arabians’ minds. Pendleton Heights plays host to the Madison County Tournament this year on Dec. 18.
The Arabians have won the past seven tournaments in a row and 29 overall.
Nov. 20 will see their season open in a different way. The varsity will compete in the Hamilton Heights Super Six, the junior varsity will compete in the Yorktown 9th and 10th Invitational, and the girls will travel to Northview High School for a competition.
The Arabians’ home opener starts at 6:30 p.m. Nov. 24 against Greenfield-Central.