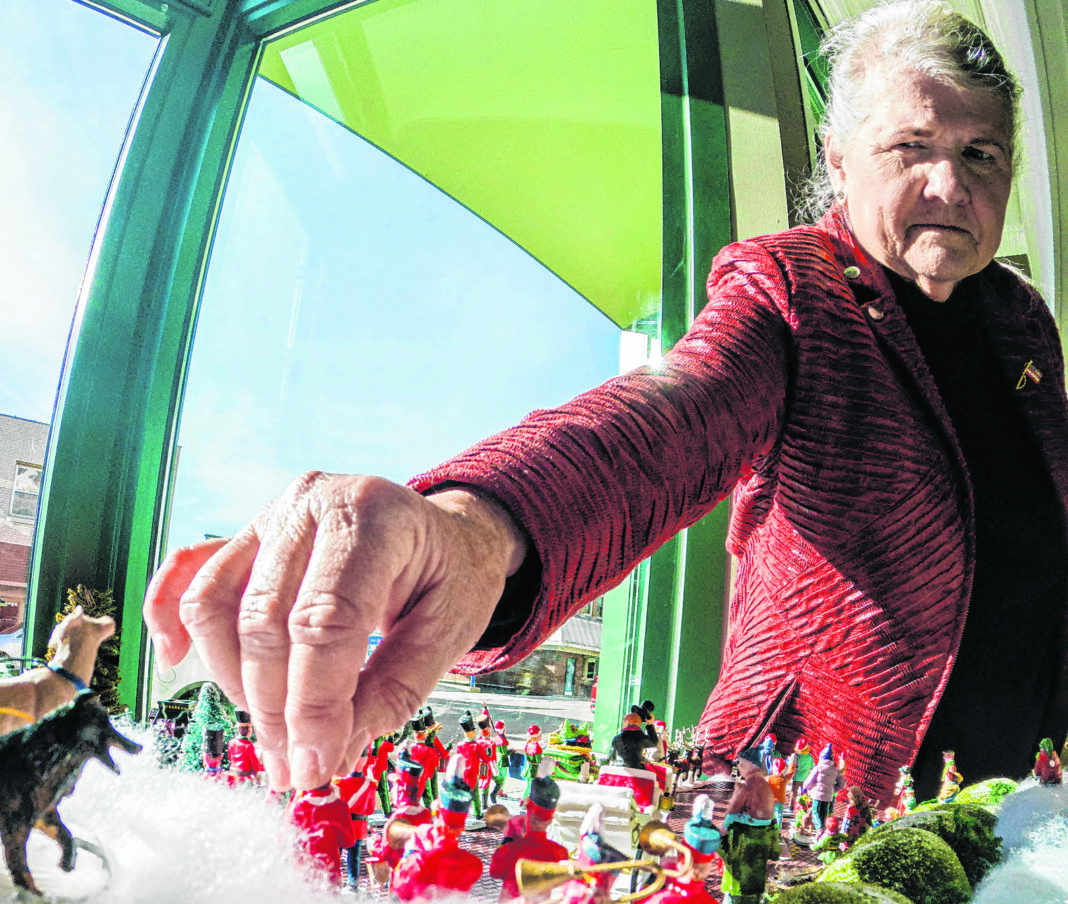 By Sue Hughes | For The Times-Post

PENDLETON — A trip to a drug store and a box of salt was all it took to start a lifelong hobby for Joanie Krieg, one she recently decided to share with the people — especially the young ones — of Pendleton.
In 1978, Krieg lived in a 2-
bedroom trailer.
She wanted to decorate for Christmas with her children but didn’t have much money, so she set up a couple of mirrors in the living room and looked for a way to decorate with them.
While at the drugstore picking up cough medicine for one of her children, she saw a small ceramic house. Thinking she could use it for her display, she took it home.
Krieg decided she needed snow to make the tiny house look more festive. She said the fake snow at the store was too expensive, so she looked around her kitchen for a substitute. Her eye fell on a box of salt, and she knew that would be perfect for her decoration.
Since then, for the ensuing 44 years, Krieg has continued to add to her collection, which has been an ongoing source of amusement for her four children and their children.
This year, however, for the first time, about half of her display is set up at Pendleton Town Hall, behind the large windows facing State Street.

As of last week, she had been working for about a week to get the pieces set up.
“I wasn’t able to bring the zoo, the harbor or the maple syrup display; there just isn’t enough room,” she said.
Included in the scenes she did bring are a carnival with amusement rides that move and a waterfall with real water.
There is so much to see, a person could spend hours looking and still make new discoveries.
Krieg buys pieces from flea markets, private individuals and online.
She said sometimes Menards gets pieces in, but they are gone pretty quickly.
Some of her pieces are not any particular brand, she said: “They just fit my display.” Her pieces include Lemax, Department 56 and Mr. Christmas.
Krieg said she has so many pieces she couldn’t give an accurate count.
When Krieg inherited 20 acres of property from a relative, she and her children built a three-story house. She lives in part of it, and daughter Lissa and her family live in the other part. On the third floor she keeps her library and her storage room for her collection.
“I have shelves probably 30 feet long on both sides of the room, and we have everything stacked two deep,” she said.
In the past she had set up her display in her home and allowed visitors to stop and see it; sometimes 30 or 40 people at a time would come through her dining room.
She quickly outgrew that room.
Just recently a grand-son was born with some health issues.
“He is our main focus at this point,” Krieg stated.
Ultimately, she decided not to put her Christmas collection in her home this year.
And when she drove past the empty windows at the town hall, she wondered if the town would allow her to decorate them for the holiday.
She stopped and asked if she could set up her displays for the children of Pendleton to enjoy.
She first spoke with Administrative Assistant Denise McKee, who loved the idea and took it to town manager Scott Reske, who gave the go- ahead for the project.
“We want to get in the habit of having something in these windows,” Reske said. “We appreciate Joanie’s display.”
Krieg’s daughter, Melissa Krieg-Davis, helps her set up the scenes. She says, “Mom has the vision; I just help her carry the boxes.”
Krieg-Davis’ husband entered the village in a contest in England. Krieg didn’t want him to do it, but he sent a video. She won first place. The award was a limited edition Lemax house. Krieg was a little disappointed, though; she would have preferred to come in second because she liked that prize better.
Although not originally from Pendleton, Krieg said she loves the town.
“As I’ve grown older, I have learned to appreciate this town. It’s a close-knit community,” she said.
As people walk down
the street in town, they stop to look at what’s on display. She said she’s seen several people lifting up children to get a better look, and several grandparents have said they can’t wait to bring their grandchildren back to see it.
And that’s the goal, she said: to have the children in Pendleton enjoy it as much as her family has.
“The joy on their faces is enough for me to do it,” she said.

Big changes at the top coming to Frankton-Lapel schools