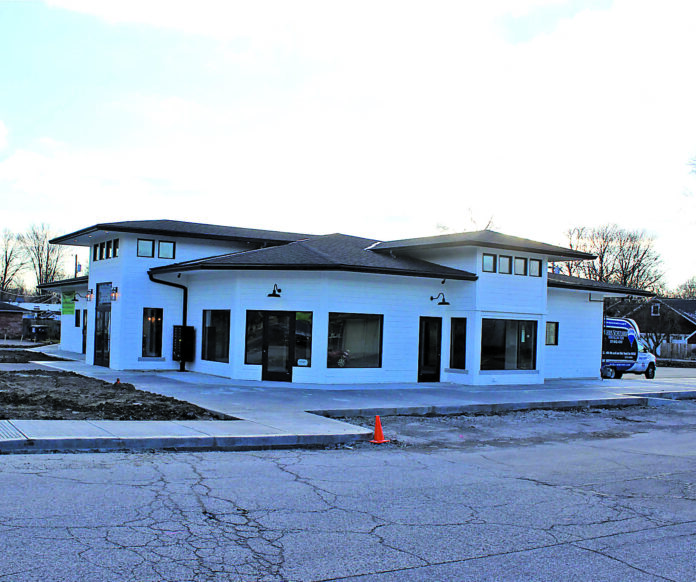 PENDLETON — With a nod to the past, a new office building called Pendleton Lumber Yard is nearing completion at the southwest corner of Pendleton Avenue and High Street — the past site of Pendleton Lumber Co. and similar businesses that date back to the 19th century.
“We have four tenants so far,” co-owner Chris Schulhof said on a recent Tuesday afternoon, on the day he received the certificate of occupancy for the building, address 200 S. Pendleton Ave.
A fifth tenant has signed on since, leaving 10 spaces available in the 5,130-square-foot building.
“I think we’ll be full by summer,” he said.
Schulhof said he and a business partner bought the property, which most recently had been home to Iron Horse Martial Arts, in 2019; after COVID-19-related delays, renovations to the 1950-built structure resumed last year, and tenants recently started moving in.
The tenants so far are Belle Ame Studio beauty salon, a Shelter Insurance office, Greyhouse Collective (an artisan home goods shop), T&S Construction Inc. (which renovated the building), and attorney and building co-owner Tim Paul.
Some of the building’s 15 spaces have a door that opens to the outside; all have doors that open to an interior hallway that connects to common spaces, such as a conference room, break area and restrooms.
The floor of the building was raised six inches, Schulhof said, using 16 truckloads of cement. The area between the building and Pendleton Avenue will be landscaped green space.
Schulhof has ownership interests in other property in town, including Pendleton Office Suites, located in the former PNC bank building south of Pendleton Lumber Yard, on contiguous property. Schulhof said demand for office space in Pendleton is high.
Some tenants from the 2,000-square-foot Pendleton Office Suites building, which he and Paul purchased and renovated in 2019 and features similar amenities, are moving to Pendleton Lumber Yard. Currently, four of the six spaces inside Pendleton Office Suites are taken. (Promise Coffee Roasters, which has a roastery on County Road 900 South, is set to open drive-thru service near the area of the former PNC ATM lane, owner Esta Henderson and Schulhof said. She plans to open in February.)
Schulhof’s optimistic outlook on tenancy “is based on the interest level that we have, the phone calls we’re receiving,” he said. A barber is considering a spot, he said.
Brittney Horton owns Belle Ame Studio and has spent the past two weeks moving from the PNC building to Pendleton Lumber Yard. She said she moved because it’s “a cuter building,” plus her space is bigger and “I have my own front door, which I like.”
Business, particularly the eyelash extensions part, has been good, Horton said. In fact, since opening in July she’s nearing the point where she might have to stop accepting new clients and is in the process of hiring a part-time employee.
Horton said instead of being concerned about the pandemic hurting business, it’s fuelled hers.
“The lash extension business has been booming,” she said. “The eyes are the focal point of the face now more than ever, because that’s the only thing being shown now when you have your face mask on.”
Tracy Mitchell, owner of T&S Construction, said he’s worked with Schulhof on other projects, and decided to take this opportunity to shift his Markleville home-based business to Pendleton Lumber Yard. It will be better for staff meetings and employees.
Also, he said, he has family considering ventures that could require retail space, so the move might help them in the future.
Schulhof is a Fishers resident and owns Chris Schulhof Real Estate Team RE/MAX Realty Services in Fishers. He also buys, sells, develops and manages properties. He has completed several projects similar to Pendleton Lumber Yard, including ones in Oaklandon and Fishers, which he has sold, and two others in the Geist area that he still owns.
Paul said Pendleton Lumber Yard offers new office space with amenities that he didn’t find readily available when he moved to Pendleton several years ago. One characteristic he said he especially appreciates as a tenant is that it’s very quiet inside.
“From a professional office standpoint, I think there’s a need for it (the new building),” Paul said.

Big changes at the top coming to Frankton-Lapel schools