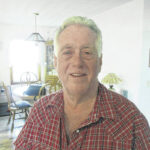 By Rich Creason | For The Times-Post

Many older folks wish they had something to do to fill their leisure time.

Unfortunately, due to finances, health issues, or other problems, these people end up sitting at the table working a crossword puzzle, playing cards with friends or family, sitting on the front porch watching the traffic go by, or just switching channels to find something to watch on the TV.

Susie and I offer another option to fill the time.

Last year, I received a call from a lady at a church in Southport, Indiana.

She had read one of my metal detecting stories in the Pendleton Times-Post online.

She asked me if I ever did presentations to groups on our hobby. She was in charge of the Senior group in her church and organized a monthly activity for her people.

She wanted us to give a talk about metal detecting and possibly show some of our equipment at her church.

For many years, Susie and I have offered free lessons on how to use a metal detector.

I told Emily we would be glad to do a talk at her church.

I asked if they had a yard or playground where we could take her group outside after our presentation and actually teach them how to use the machines.

She said there was several old house sites, a playground and soccer field. We later found there was also an area that used to have a concession stand for the soccer players. I told her this would be great.

We did our talk, set up a table outside and began to explain eight or nine different detectors and how they worked.

We had several small pinpointers which are basically small metal detectors for finding smaller items in the ground.

We had many different digging tools for removing targets the detectors located.

We had 17 seniors who wanted to try the machines.

Susie and I showed them how to operate the detectors and followed them around the grounds giving them pointers on how to find buried items.

We uncovered a lot of trash, some toy cars, several keys, and a lot of assorted coins, none which were old.

Some of our students lasted about an hour, while some others were still detecting after a couple hours.

The playground, which was the most likely place to find a lot of treasures, was off limits at the time.

The school attached to the church had a school group playing there.

They returned inside just as we were finishing up detecting for the day.

Emily sent us a great card signed by many of the group thanking us for our show.

About a month ago, I had another call from a church near Mt. Comfort.

Like last time, the lady in charge of their senior group had somehow heard about our activity and asked if we could put on a presentation with our metal detectors.

I told her we would be glad to do that.

As of this writing, we only have the time and location.

The event will be in two days, so I don’t have any other details. I do know the church is old so we should have some ground we can detect.

When I do a show like this, I often carry some old wheat pennies or maybe a few buffalo nickels to seed the ground if we are not finding much.

It’s fun so see some of the older participants see these old coins and say, “I used to spend these when I was a kid.”

We also talk to individuals who wish to learn the hobby.

If they live in an older house, we offer to bring some detectors to their location, teach them how to use the machine, then all of us detect their yard and see what kind of history we can find.

Pendleton is an old town, and there are hundreds of old coins, tokens, toys, etc. under the ground at many of these houses.

My oldest coin I have found to date is an 1803 large cent. I found another coin which was a rare date Indian head penny in very fine condition.

I have found tokens that were good for one cigar and others which were good for a pint of milk. All of these and much more were found in yards around Pendleton.

If you are tired of doing nothing, and would like to learn this interesting hobby, contact me at the below email and see if we can get together and explore your yard.

Rich Creason is an award-winning outdoors and travel writer whose work has appeared in local, regional, national and international publications for 40 years. Born in Anderson, he is a graduate of Markleville High School. He lives in South Madison County with his wife, Susie. He may be contacted at [email protected]

The history of Anderson Township, Part 2