Part 1 of a two-part column.

By Stephen Jackson | For The Times-Post

Adams Township forms the southeast corner of Madison County and is 35 square miles, being five miles east to west and seven miles north to south.
It was one of the first five townships formed in Madison County sometime between 1823 and 1829, and was named for Abraham Adams, who was the first white man to settle within its borders.
Abraham Adams and his family arrived there in 1823 and built a log cabin a short distance east of Ovid.
Ovid, and New Columbus as it is also called, are names in need of explanation.
According to the State of Indiana’s official highway map, it’s called Ovid.
However, on a recently issued official map of Madison County, it’s called New Columbus.
And, if you ask residents of the Adams Township community, some will tell you Ovid, while others say New Columbus.
Adding to the confusion are the road signs located at each end of the community on the New Columbus Road, formerly State Road 109, which read: New Columbus or Ovid.
Why the confusion?
There is a simple explanation.
It was Abraham Adams who, in 1834, platted a town on the south side of Fall Creek and gave it the name New Columbus.
His selection of the site, which rises some 30 feet above the low-water mark in nearby Fall Creek, is today one of the more attractive ones in our county.
When approaching from either north or south, or from the east, one can appreciate the beauty of the setting.
The name change took place in 1837, when a post office was established there.

Previously, the residents ventured to Huntsville to post and receive their mail.
With the new post office came the new name, Ovid.
The name was selected by the U.S. Post Office because it alleged it was confusing for staff because of an existing town of Columbus in Bartholomew County.
Why the name Ovid was chosen is not recorded.
In history, Ovid was the name known in the English-speaking world for the Roman poet, Publius Ovidius Naso.
If the ancient poet’s name was the source, no record was left to authenticate it.
The residents were not happy with the name and took legal action in 1840 to get it renamed New Columbus.
They got nowhere, and it wasn’t until the post office ceased operations there a century later that the citizens tried again.
By then, the name Ovid had become ingrained into the local culture, and so the only resolution was to call it by both names, which is why the road signs read as they do.
Early in its history Ovid had the nickname “Little Pasquotank,” derived from North Carolina’s Pasquotank County, from which many of the early pioneers came to settle in the area.
Many of them were old Primitive Baptists and were referred to as Pee Wees.
They built the Primitive Baptist Church at the top of the hill a mile west of Ovid on County Road 600 South and established the Pee Wee Cemetery there.
Only the cemetery remains.
A different group of Baptists called themselves German Baptists or Dunkers.
They settled in an area referred to as Old Columbus at the intersection of County Road 500 South and New Columbus Road.
It is believed they established the village far north of Fall Creek to create a buffer zone of a mile or so from the North Carolina Baptists of New Columbus.
Their place of worship, a brick structure, was erected in 1873 and still stands today, although it’s a private residence.
The area immediately east of the intersection had the dubious name of a departed canine, Dead Dog.
The old township district school house No. 3, attended by the German Baptist children, was known as the Dead Dog School. 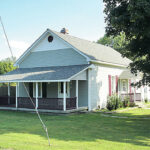 The history of Anderson Township, Part 2