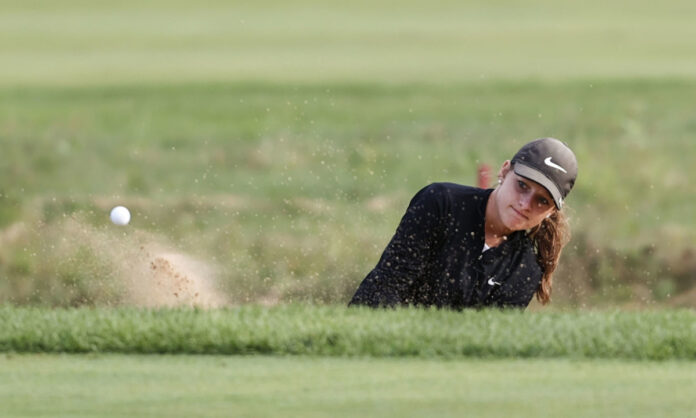 LAPEL — The conditions were not perfect.
The end result was ideal.
Macy Beeson played a waiting game through a nearly two-hour weather delay, then had her wait extended watching her closest competitor wrap up her final round.
A 12-hour-plus day at Prairie View Golf Club in Carmel was well worth it for the Lapel junior seeking to become the state’s first back-to-back IHSAA girls golf state champion in nine years.
“I’m excited. I’d love to repeat what I did (as a sophomore),” Beeson said prior to the start of the 2021 season. “It’s my whole goal. I feel more relaxed this season. I know I can accomplish what I want to do. Just knowing I can do it relaxes me a little more.”
Evansville North’s Chloe Johnson missed a short putt, which would have forced a playoff, on her final hole of the two-day tournament to give Beeson a state title for the second straight year.
Goal accomplished.

“I just decided I couldn’t do it without practice,” Beeson said of coming back to win a state title for the second time. “I started working long hours leading up to the tournament. After practice I would come home and spend two to three hours every night on my short game, and that’s definitely how I won.
“During the season, I definitely didn’t do everything I wanted to do. My goal was to win sectional and regional again, but that didn’t turn out how I wanted. It made me fight back even harder and practice harder to get my last goal done for the season.”
The Lapel lefty finished with a two-day total of 144, even par, one stroke better than Johnson, who had previously missed a longer putt attempt that would have made her the champion.
“She’s the absolute best with her mental and physical capabilities,” Lapel coach Dylan Crosley said of his star golfer. “There are always improvements for the physical part. We can always gain a couple more yards. Other than that, her demeanor is real high, and she’s unbelievable to coach and is an unbelievable person off the course as well.”
Beeson was co-leader with Johnson after Friday’s first round with a two-under-par 70. She shot a two-over-par 74 on Saturday.
“We finished No. 18 and she wasn’t too happy with her round,” Crosley said. “We didn’t think we’d win the state championship. We waited around, waited around and watched the scores.
“(Johnson) bogeyed No. 11 and then we checked our phones and she had double-bogeyed No. 13 to get to even. We got word that it could go to a playoff, so we went to the range when Johnson was on No. 16.”
When they returned to the clubhouse to practice on the putting green, which was just 100 yards from the 18th green, they saw Johnson’s attempt on a 40-foot putt that would have given the Evansville native the title. She left it five-feet from the hole.
“Me and Macy’s dad, Ryan, we turned our back,” Crosley said. “There were around 200 people around the green so we would hear if she made her par putt. We heard a sigh and it was disbelief that she missed the 5-footer to get Macy the win.”
It was a long but well-worth-it day for Beeson, her coach and fans. They got to the course around 7:15 a.m. to warm up for an 8:39 am. tee time. With the rain delay and Johnson playing in a later group, they didn’t leave the facility until about 8 p.m.
Beeson is the first back-to-back champion since Chesterton’s Kelly Grassel won state titles in 2011 and 2012.
A junior, Beeson will have the opportunity to go for three in a row. It has been done only twice in state history. The last was Martinsville’s Leigh Anne Hardin, who won titles from 1997-99.
Beeson is the seventh player in state history to win a girls golf title in consecutive seasons.
“Macy’s state championship is a tremendous accomplishment,” Lapel High School athletic director Bill Chase said. “The school and community are very proud of Macy and her back-to-back state championships.
“It was great to see all the students that came out to support her. She, by far, had the largest turnout of spectators following her around at the state meet.”
Crosley said about 100 Lapel students were in attendance on Friday.
Lapel welcomed Beeson and her contingent home with a fire truck parade later Saturday evening.
“I loved it. (All the students and supporters there) was my favorite thing,” Beeson said. “I felt, with them out there, my game was better and my attitude was better. It made my drive higher. I just wanted to go out there and show off. I love it!”
“We went down Main Street (in the parade). It was a Saturday night so the bars were full and the restaurants were full and having everyone come out to the street was really cool. It was definitely a long day, though. I went home and went straight to bed.”
A year ago, Beeson’s tournament run included individual titles in both the sectional and regional. This season, Beeson placed fourth (75) in the sectional at Noblesville’s Harbour Trees, and followed with a third-place finish (75) in the regional at The Edge in Anderson, Lapel’s home course.
After Friday’s first round, Beeson was tied for the lead.
She had birdies on holes No. 7, No. 13, No. 14 and No. 18. All were par 5s except for No. 14, which is a par 4.
One other player, Lydia Bauersfeld of Castle, was three strokes behind. Four others were four shots back.
For the final round, Beeson parred the first six holes before a bogey on No. 7. She followed it up with a birdie on the par 4 No. 8 hole and was at even par, 36, at the turn.
A rough start on the back nine, Beeson bogeyed the 10th and 11th holes. No. 11 was interrupted with the long rain delay.
Back on course she bounced back with birdies on No. 13 and No. 14, two holes she birdied on Friday, but followed it up with bogeys on No. 16 and No. 17. She parred her final hole, which proved to be crucial.
“Coming off that green, I knew I could have done better,” Beeson said. “Getting bogeys on No. 16 and No. 17 was definitely not how I wanted to end my round. I played the best I could. If I didn’t win I wasn’t going to be upset, but it worked out.”
Johnson didn’t come away empty-handed. Her North team was playing for the team title and won it by 18 strokes with a two-day total of 606 (302-304). Homestead was second with a 624.
Macy’s state championships “mean a lot” to Lapel, Crosley said. “The students came out Friday, and the (community) showed its support
(with the parade). I think they are all … proud of Macy and her accomplishments.”
“I am definitely hoping for a three-peat. That’s the goal,” Beeson said.

A new way to serve