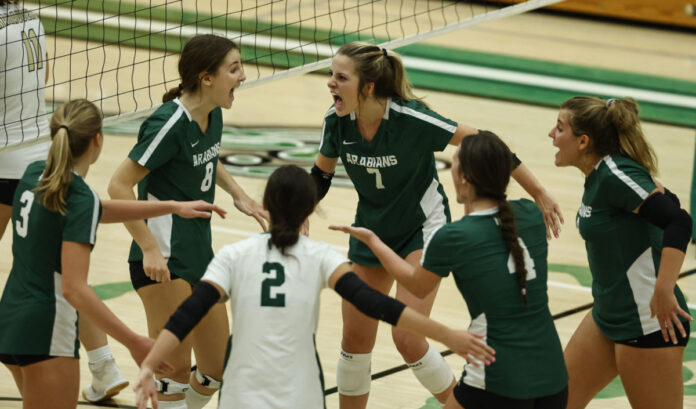 YORKTOWN — They say all good things come to an end.
That’s what happened to the Pendleton Heights High School volleyball team Saturday in Class 4A Sectional 9 at Yorktown High School.
The Arabians, ranked No. 18 (all classes) in the latest Indiana MaxPreps poll, lost to No. 12 Mt. Vernon, 3-1, in a semifinal match.
Set scores were 25-23, 25-16, 19-25, 25-11.
Pendleton Heights finished the year 30-4. Two of the four losses were against Mt. Vernon; another loss came to the eventual sectional champion, No. 1 ranked Yorktown, the defending 4A state champ. The other loss was to No. 2 Hamilton Southeastern.
“It doesn’t feel good right now, but you look at our season in its entirety, we’re 30-4 and it’s the most wins since 1985,” Pendleton Heights head coach Blair Barksdale said. “Third place in the (Hoosier Heritage Conference behind Yorktown and Mt. Vernon) is the best since I’ve been the head coach. We had two tournament wins, won the Madison County championship. This is the best, as a program, in a long time.”
It was the most wins since 1985, when the Arabians went 32-3. The school record for wins came in 1982 when the team went 36-4. The 1983 club was 34-2. The program won seven consecutive sectional championships from 1980-1986. The 1984 team won the school’s only regional crown. The last sectional title came in 1998 in Class 3A.
The team graduates four seniors: NCAA Division I recruit outside hitter Avery Ross (Oakland), setter Olivia Wright, middle blocker Gabrielle Ennis and defensive specialist Tess Phillips.
“All of them. They have shown a lot of emotional growth,” Barksdale said. “We talked about, in the locker room, if this would have been last year, we would have been smoked in three sets. We had a lot of fight to us, and that has a lot to do with our senior class.
“They showed a lot of maturity. All of them worked very hard in the offseason and showed a lot of improvement physically, emotionally. They’re a dependable class and have left a big legacy for our program. We have big shoes to fill when we think about our program for next year.”
Against Mt. Vernon on Saturday, the Marauders won a very competitive first set.
There were seven ties, the last at 18, and two lead changes. One of Ross’s 11 first-set kills locked the match at 18. On the next point, MV setter Rylee Ugen got the advantage back to her club with a kill on a tipped ball.
Mt. Vernon led from start to finish in the second and fourth sets.
In a close third-set battle, Pendleton Heights broke a 5-5 tie with an 8-3 run. It started with a kill from junior outside hitter Hannah Grile. Ennis followed with a service ace. Sophomore middle blocker/right side hitter Mikala Ross had three kills during the spurt; Avery Ross had two. An Ennis kill put the Arabians up 13-8.
The Marauders fought back to get within two, but strong serving by Wright helped the Arabians force the fourth set. Pendleton Heights scored three points on the senior’s serve, including two service aces. The Arabians also had a combo block from Avery Ross and Ennis. Wright’s second ace put the Arabians up 23-17.
“That’s the service pressure we were needing right at that time,” Barksdale said. “That’s a point where we have to be aggressive in our serves. They’re a good enough offensive team we had to put service pressure on them to get them off the net to go high to the pin so we can defend a lot better. That was key and what we needed down the stretch and what we were missing in that fourth set.”
In the fourth, Mt. Vernon scored the first five points. Up 14-7, the Marauders went on a 7-0 run.
“They did a good job keeping the pressure on and not letting up,” Barksdale said of the Marauders. “They force you to make the errors, and we made too many down the stretch. I was still proud of our team. We were down 10 or more in the fourth set, and we still battled. We were fighting all the way to the end.”
Avery Ross finished with 29 kills. Ennis had 11. Wright led with three of the Arabians’ six service aces. Mikala Ross had two blocks. Wright and Grile each had 14 digs. Libero Ramsey Gary had 11. Wright also had 44 assists.