PENDLETON — Pendleton Police Department and a town maintenance building will soon receive upgrades courtesy of federal American Rescue Plan (ARP) funds received last year.
Pendleton Town Council recently approved spending $126,411 for a new police body camera and in-vehicle camera system, and about $14,000 for an emergency power generator, money that comes out of the town’s first ARP installment of $493,425.
“We need to protect our police officers like we need to protect our residents,” Town Council President Chet Babb said of the new camera system.
The generator will address an issue that arose during the 2019 tornado in Pendleton, during which the town couldn’t immediately access certain equipment in the maintenance building on North Pendleton Avenue; the power was out so the doors wouldn’t open, Babb said.
The purchases were approved at a special town council meeting Thursday, Jan. 6.
PPD Captain Lucas Traylor said the new Watch Guard/Motorola Solutions system — comprised of 13 body cameras and 11 vehicle set-ups — represents a move to “the latest and greatest” for the 11-full-time officer department.
The body cameras will be a significant upgrade, especially when it comes to battery life, he said. The current cameras, which have built-in batteries, record for about 30 minutes before needing to charge. The new cameras have removable batteries that last 12 hours, and each camera comes with a spare.
The cameras feature “record-after-the-fact,” which allows retrieval of footage from the previous 48 hours even if the officer forgot to push the record button, Traylor said.
The addition of more advanced in-car cameras will provide enhanced views of events, including footage from an additional rotating camera up front, he said. A camera up front also is able to read license plates.
Furthermore, the new system — which won’t be in place for at least a couple of months — will be cloud-based, meaning footage is recorded and stored online instead of locally, which makes sharing the footage with others, such as the prosecutor’s office, faster and easier.
The system also offers a community engagement web page, through which the public can share information with police, such as photos or video.
The cost of the system includes a future one-time replacement of all the body cameras with the latest version.
“There’s no denying that these are expensive, but it’s also an investment, Traylor said.
“If this protects an officer and the town from a frivolous lawsuit one time, it could be worth it. If this helps protect an officer from an officer complaint that was unwarranted, it’s worth it,” Traylor said. “And even to take it one step further, if these body cameras and dash cameras help the victim of a crime get justice because we have better evidence to support the crime — worth it.
“Body cameras and dash cameras in today’s society are almost a requirement because society expects that we have those things. Nearly every agency in the county has them. If we go to court, a jury in a trial wants to see that video evidence.”
Babb said the town must allocate the remainder of its first ARP installment by March 31.
He encouraged people to contact the town with suggestions for purchases.
He said one idea that will be considered is improved security for Town Hall and water facilities, including cameras and fencing.
The town is slated to receive a second installment of ARP funds in the future.
Park board
Also during the Jan. 6 special meeting, the town council voted 3-2 to pass an ordinance “modernizing the Pendleton Park and Recreation Board.”
At press time, however, the status of the new ordinance remained unclear.
The new ordinance dissolved the existing seven-member board and established criteria to appoint a new same-size board that “reflects state law.”
Babb said last week the big change is that the town council — instead of just the town council president — will decide the town’s four board spots.
The change also means the current council will fill all four of its seats this year instead of just the one seat with a term that expired Dec. 31, 2021.
The other three park board seats will remain appointed by South Madison Community School Corp. board of trustees, Pendleton Community Public Library board of trustees and Madison County Circuit Court. New appointments or reappointment are required.
Bryan Williams, who has been president of the park board the past three years, said there have been discussions this week with several people, including Pendleton town attorney Jeff Graham, about the legality of last week’s dissolution process.
Also, he said the dissolution, if left to stand, could cause the park to lose $350,000 of annual property tax revenue authorized by the original ordinance.
Williams said it’s his understanding that the town council will revisit the issue at its regular meeting, set for 6 p.m. today, Thursday, Jan. 13.
Graham confirmed that midday Thursday.
“The Council will revisit the park board ordinance it passed on 1/6/22 as the earlier ordinance was not compliant with Indiana law in terms of discontinuation of the Board,” he said in an email to The Times-Post. “As such, that part of Ordinance 22-01 is void, and will be acknowledged as such tonight.” 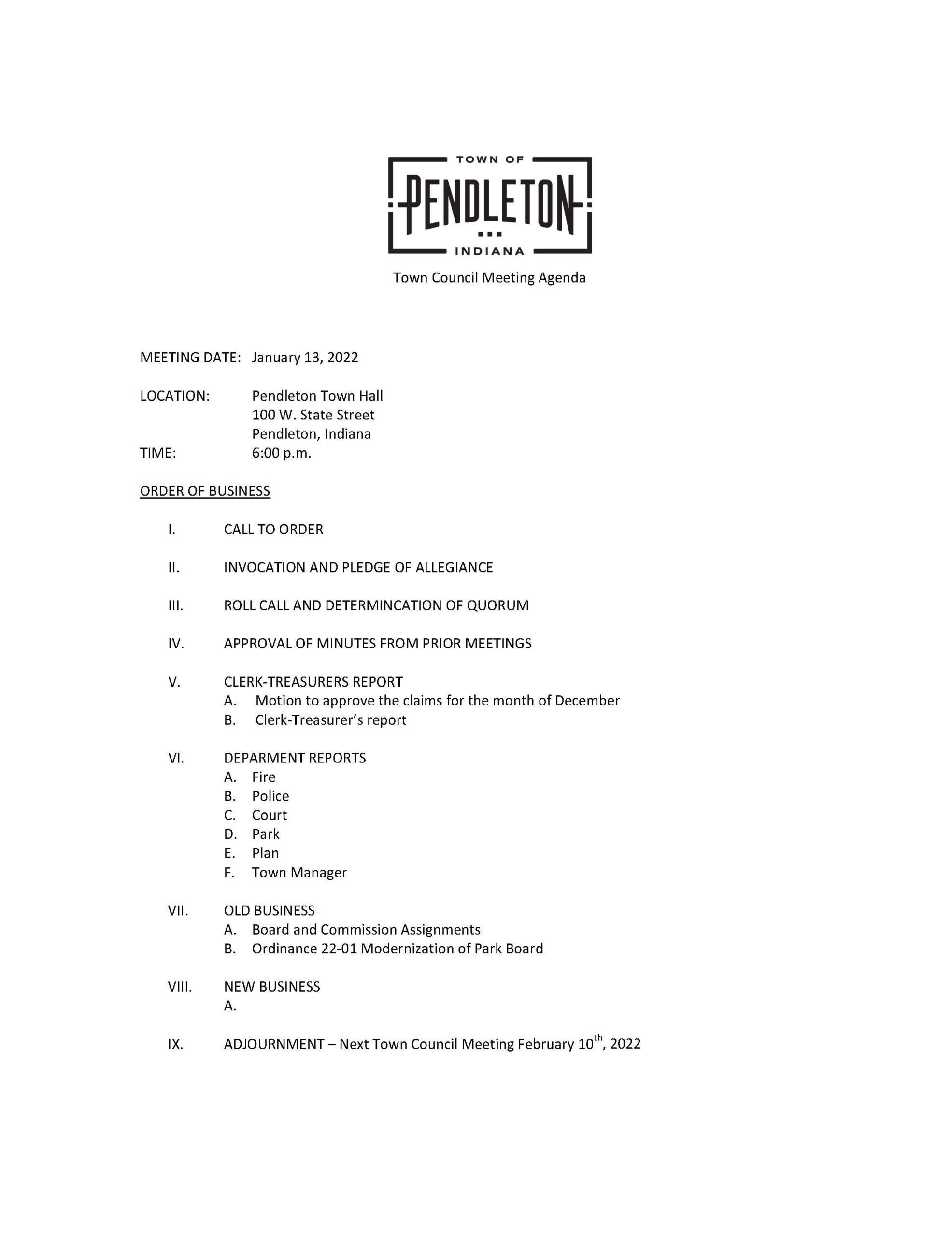 Officers elected
In other business, the town council elected its officers for the year, reappointing Babb as president and Shane Davis as vice president.