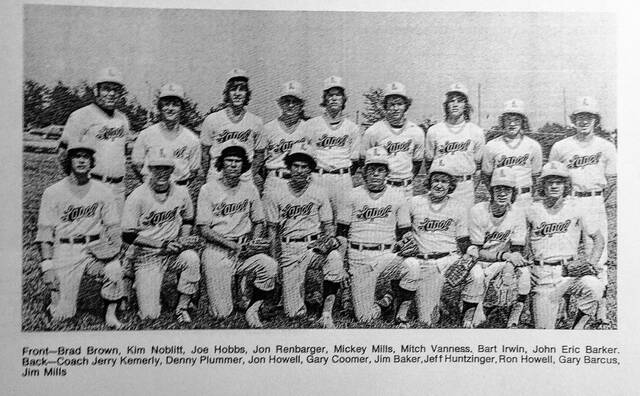 The year 1976 was a very special year — it was America’s 200th anniversary, and patriotism was flowing everywhere.

My wife and I lived in Florida at the time. We can remember Lee Greenwood’s song “God Bless The USA” being played and with everyone standing, holding hands and singing his song. Newspapers had contests on “What You Loved About America?”

The Apple computer was developed and released in 1976. The first class of women was inducted at the U.S. Naval Academy. Jimmy Carter was nominated for president of the United States by the Democratic National Convention. The U.S. Treasury Department reintroduced the $2 bill on Thomas Jefferson’s 233rd birthday, as part of bicentennial celebration.

There were several sporting events in ‘76: The Summer Olympics took place in Montreal. In a game of the century between the Boston Celtics and the Phoenix Suns, Boston defeated Phoenix, 128-126, in triple overtime. Today, that game is still the greatest game of the NBA. Johnny Rutherford won the (rain-shortened) shortest race in the history of the Indianapolis 500, at 102 laps. In Super Bowl X, the Pittsburgh Steelers defeat the Dallas Cowboys 21-17 in Miami. The name Blue Jays was chosen for the expansion Major League Baseball team in Toronto.

Many other things took place in Lapel during its centennial year. Planning for the celebration was important. Chairman Jon Noggle had a committee that was formed several months prior. The grand opening would be from 9 a.m. to noon Saturday, April 24. Headquarters was in the Savings and Loan office, 823 Main St. In addition to the centennial, Lapel officially had a 100th birthday celebration. The official birthday for Lapel/Fishersburg is April 27, 1876.

The parade was scheduled to start at the school. This would end the week’s activities for June 26. The parade route would begin at the school parking lot and end at the American Legion Post, at the north end of Main Street. The theme of the parade was “Lapel — 100 years – still the only one in the world!!” There are many residents not aware of and how Lapel received that name.

Lida Teeters, 102, was honorary parade marshal. Bicentennial chairman Marjorie Fisher encouraged everyone to ring a bell of freedom. The Lapel War Mothers Club float was judged best overall in the parade. Centennial souvenirs were plentiful. A time capsule was sealed and locked by members of the centennial committee. The time capsule is scheduled to be opened on April 27, 2026.

Lapel High School faculty deserves a lot of praise for their hard work. During the year, there were many distractions with the centennial activities. Since Superintendent Dale Prough had retired, who better to take over than Gerald Roudebush and Gene Henieser, his assistant. Marvin Pike followed as the new principal. Jack Howell became vice principal.

The National Honor Society was special at LHS. You must remain attentive, read your assignments and complete any projects. With band and sports, you sometimes wonder how you have enough time to study? However, it is an honor to be a part of the classic organization. When Mr. Hoover took over the band, it was in the building stage. Band members are always busy. They play for most of the sporting events and other special programs.

The Optimist Club helped purchased a new batting machine for the baseball team. Daily use of the machine really improved the team. The team beat Anderson in the sectional but lost to Elwood.

In football, LHS was also in a building year. It ended the season 3-7.

The LHS golf team had a great year. The only losses were to Noblesville and Yorktown. However, Yorktown was ranked No. 1 in Indiana. David Barker and Sam Maxwell made all-conference.

In basketball, LHS fell short of getting the win several times; the team ended the season 11-11. WRC Conference player was Jon Howell.

The girls basketball team had a very good year. It won the last four games of the season then won the first two games of the sectional. But it lost to Elwood, ending its chance for a sectional championship. Chris Graham was named all-conference.

There are many students who take for granted the cleanliness of their school cafeteria. At one time, I was responsible for the mess hall at the Indiana Reformatory. The superintendent/warden at that time told me, “You are assigned to that mess hall until you get it straightened out!” Feed inmates a bad meal, and they will tear-up your mess hall. It took three months of hard work, but I got it done. When you buy good products, but then serve it to 2,000 inmates, it loses taste with quantity.

I assure you, that it was a daily problem those school cafeteria workers also faced. Cafeteria Manager Maxine Hofer, Annabelle Oleksy, Ruth Van Duyn, Dorcus Mullett, Wilma Shupe and Jolene Mills should be commended for their efforts.

Cleanliness affects the morale of an institution. It can affect employees’ pride in working there and the students who attend the facility. Custodians Bobby Baker, Ed Moore, Bob Westrater, Emma Smith and Pam Hobbs know what a challenge it is to keep the school building and grounds neat and clean. Sometimes it is the little things, like litter, can ruin the appearance. All of the above combined make LHS a great school.

Ray Tincher attended Ball State University and retired from Indiana Department of Correction in 1997. He worked at IDOC for 30 years, serving in a variety of roles, from correctional officer to warden. At retirement, he received the Sagamore of the Wabash Award from Gov. Frank O’Bannon. He wrote several training manuals as part of his employment and is a published author: “Inmate #13225 John Herbert Dillinger (2007).” He and his wife, Marilyn, live in Lapel.