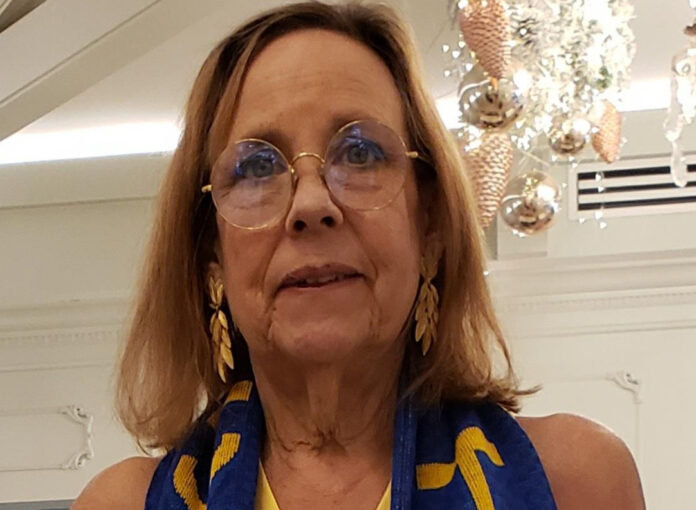 Mary Catherine
Ackerman (Dec. 13, 1951 – May 16, 2022)
Mary Catherine Ackerman, Spencer, Indiana, our loving mother, wife, friend, and teacher, passed away on May 16 after a short and courageous battle with cancer. Born Dec. 13, 1951, Mary was the second daughter of Robert E. Wynant and Nancy Reighard Wynant of Pendleton, Indiana. She attended the Pendleton schools and was in the first graduating class of the newly consolidated Pendleton Heights High. She attended Pendleton First United Methodist Church.
Mary received her bachelor’s and master’s degrees in English from Indiana University, where she was a member of Alpha Phi sorority, serving as chapter president her senior year. She met Mike, her future husband, while at IU, and they were married in July 1977. Mary and Mike were blessed with two sons: Matthew, born in 1979, and Adam, born in 1984.
Mary began her 35-year teaching career at Triton High in Bourbon, Indiana, 1974-1976. She then taught at Indianapolis North Central High, 1976-1979, and ended her career at Owen Valley Middle and High schools, 1980-2010. Mary received several teaching awards during her career, but she was most happy in the classroom with her students. She held a special place in her heart for the students who put forth the effort in her class, no matter what their academic ability.
After retirement, Mary served as a member of the Owen County Preservations team that managed the refurbishment of the Tivoli Theater in Spencer, Indiana (another sincere “thank you” to Gayle and Carl Cook). She also worked as a part-time receptionist at the IU Alumni Association in Bloomington. Mary loved her time working and the friends she made at both positions.
Mary is survived by her husband, Michael Clarence Ackerman of Spencer; sons Matthew Robert Ackerman of Indianapolis and Adam Charles Ackerman of Bloomington, Indiana; her mother, Nancy Reighard Wynant of Pendleton, Indiana; sisters Diana Garner (Donald) of Elwood, Indiana, and Rachel Wilcox (David) of Pendleton, Indiana. Mary is also survived by an aunt, many nieces, nephews, cousins, and in-laws, all who loved her dearly.
Mary was preceded in death by her father, Robert E. Wynant, in 2012.
Mary’s family would like to thank her doctors, her hospice nurse, Charmaine Matavuli, and the caring nurses at IU Hospice House in Bloomington. A special thank you to Mary’s friends Sally Renne Murphy of Ellettsville, Margot Renne Payne of Greencastle, and Alison Martin of Indianapolis who brought comfort to Mary during her final months. Also, a thank you for all the cards and letters from Mary’s former students, colleagues and friends. They brought her fond memories, laughter and joy these past months.
Mary has chosen cremation and has requested no public service. West, Parrish and Pedigo Funeral Home in Spencer is handling arrangements. Memorial contributions can be made in Mary’s name to Owen County Community Foundation, 60 E. Market St., Spencer, IN 47460 https://www.owencountycf.org/