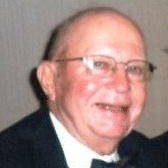 He was preceded in death by his brother, William Robert Goff and his sister, Shirley Ann Weeks; his first wife, Mary Goff (Hargis), and his second wife, Maxine Goff (Wildman). He is survived by his third wife, Jacalyn Montgomery-Goff, son, Richard W. Goff Jr. (Rachel Butler-Pardi), his daughter, Angeline Goff Pansch (Rainer), and five grandchildren. He is also survived by his nephews, Charles Goff (Keira) and David Goff (Christy).

Dick was born in Pendleton, Indiana on April 11th, 1930, to father, William Bailis Goff and mother, Helen Lorraine Goff (Roberts). His grandfather was Miles Morton Goff, the founder of Goff’s Quality Meats of Pendleton, Anderson, and Greenfield, Indiana. Dick graduated from Pendleton High School in 1948. He was captain of the 1947 Pendleton High School “Fighting Irish” Basketball Team that won the Indiana Regional Title. Dick was also Senior Class President and Salutatorian at his graduation. Dick graduated from Indiana University in 1952. While attending IU, he played basketball under Branch McCracken, his freshman year. He was also President of ATΩ fraternity, Inter-Fraternity Council and Senior Class Vice President all while joining ROTC. After graduation, Dick received a full commission in the US Army and was assigned to the 1st Infantry Division in the 63rd Tank Battalion. While in the Army, he was deployed to Kitzingin, Germany. He married Mary Hargis in 1954 before being discharged from the US Army with the Army Commendation Medal for meritorious service.

Dick and Mary returned to Pendleton to work in the family business before Dick eventually got a job with the Kroger Company in Cincinnati, Ohio. Dick rose to the level of Vice-President before departing Kroger in 1986. Afterwards, he continued to work in the meat processing industry in various capacities. While living in Cincinnati, Dick and Mary started their family, having two children (Rich and Angie). Dick was known by his family and friends as an avid sportsman. He loved to play golf and enjoyed testing his skill at other sports, like tennis. He was a big Bengals, Reds, and Hoosiers fan, as well as a dedicated supporter of his children’s and grandchildren’s endeavors. Dick credits his long life to “staying active in sports as a participant and a fan”. Dick was an active Mason, and in his later years, regularly volunteered at Shriner’s Children’s Hospital. Dick met Jackie Montgomery in 2007 and the couple married in 2018. Dick enjoyed a rewarding and much deserved retirement with Jackie at his side.

Dick Goff left a great legacy of love of family and friends, and we will all miss him dearly. Visitation will be Friday, July 15, 2022 from 10:00 am-12:00 pm followed with a Masonic Service at 12:00 pm at Wilson St. Pierre Funeral Service & Crematory – Lahm Chapel, 211 E. State Street, Pendleton, Indiana 46064. Graveside service will be at Grovelawn Cemetery, Pendleton. Donations may be made in lieu of flowers to Shriners Childrens Hospital http://www.shrinerschildrens.org. To leave a memory or an online condolence, please visit www.wilsonstpierre.com.