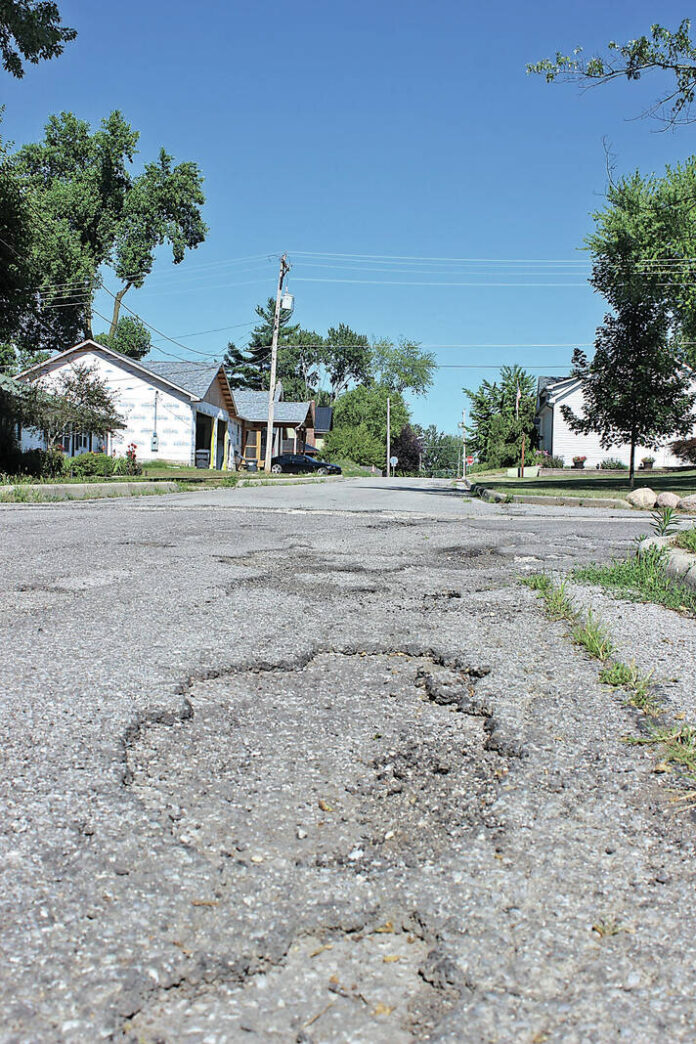 PENDLETON — Pendleton Town Council approved a bid from E & B Paving to repave more than dozen sections of street in town at a cost of more than $1 million.

“The bids came in, like everything else, they’re high right now,” town manager Scott Reske told the council, before it voted 5-0 to approve the bid from the Anderson-based company at its regular July meeting.

The town received a $701,840 Community Crossings Grant from Indiana Department of Transportation, a program designed to pay 75% of the cost with towns picking up 25%.

Reske said the town will have to contribute almost $387,611 instead of about $233,000, which it’s able to do using various funds for street work, which come from gas taxes.

“We’ve got enough to make it happen,” Reske said.

Some of the streets or street sections will be milled and resurfaced, while other at will be resurfaced only.

– Oxford Street, from Asbury to Broadway

– Pendleton Avenue, from the railroad crossing to State Road 67

Reske said work is expected to begin this summer and be done by the fall.

Pendleton resident Allen Inman, who has lived in his home on Canterbury Road since it was built 27 years ago, said on Friday that he was happy to hear his street was going to be repaved.

He said the road isn’t too bad, but “there’s a couple of spots you’ve got to slow down” or there can be a jolt.

This is the first time the roads in his neighborhood have been repaved, Inman said, a move that could improve property values, he added.

The recent Community Crossings grant came from the first of two grant cycles for 2022, Reske said. He said the hope is to get additional funds for the town in the second cycle.

“We’re going to apply to reconstruct the culvert on Pendleton Avenue at Reformatory Road,” Reske said.

The maximum funds the town is eligible for in the second round is just under $300,000.

The town received three proposals from companies interested in building an aquatics center in town.

But they weren’t exactly what the town had hoped for.

“All three proposals, we couldn’t go with them — they’re too expensive,” Reske told the council.

The town wants to build an aquatics center that would operate through a public-private partnership that would include two 50-meter pools — one indoor and one outdoor, and both suitable for competitive and recreational swimming.

The town’s request for proposals, which it posted on its website in April to attract bidders, states the possible site for the facility is 13 acres of town land near I-69, on South Heritage Drive next to Community Wellness Center. Besides the two pools, other facility needs mentioned include an outdoor baby pool and a warm pool indoors for swim lessons, fitness classes and more.

Reske previously said the idea for the project surfaced during discussions about what to do about the town’s Alvin D. Brown Memorial Swimming Pool, which is about 40 years old, and also factoring in the pool at Pendleton Heights High School, which is about 50 years old. Both pools need about $5 million of rehabilitation, he said.

If an aquatic center is built, both of those pools likely would be shut, he said.

The town sought proposals from companies interested in working with the town and other entities, including Pendleton-Fall Creek Park Board, South Madison and Frankton-Lapel school corporations, and Pendleton Swim Club, to make it happen.

The goal was for the center to cost the town nothing beyond offering a 99-year lease of the land at a nominal fee and tax abatement on the facility, Reske said previously.

Another goal was to have the center ready for summer 2024.

Now, Reske said, the goal is to find an “alternative path” that’s acceptable to the town.

He said the town plans to meet with the three companies that submitted proposals.

Councilman Bob Jones raised the possibility of the town passing a resolution opposing the state gas tax, to encourage state legislators to “contemplate giving some of the money back to taxpayers.

“It would be a big help to the citizens in the community,” he said.

The resolution didn’t gain traction with the rest of the council, however.

Council President Chet Babb said he doesn’t support lowering revenues generated by the tax, saying to do so would be “hurting yourself down the road.”

Council member Marissa Skaggs said she was against the town taking such a step for several reason, stating that the issue is “above our pay grade.

Also, it makes the council appear partisan “when we try really hard not to look partisan up here,” she said.

Furthermore, she said she doesn’t “want to be the community going on the record” against the gas tax when it has received more than $700,000 in Community Crossings state grants this year.

Council member Steve Denny seemed flummoxed by the issue being on the agenda considering it had been discussed previously.

“I don’t even know why we are talking about it again,” he said.

Also discussed at the meeting:

– The town council heard details about an effort to install a Safe Haven Baby Box at the Pendleton Fire Station. Resident and local business owner Julie Schnepp spoke to council about the effort, which would provide a mother of a newborn a safe and anonymous way to surrender her child if she is unable to care for it. The box has a door on the outside of the building that locks once a baby is placed inside. An alert is automatically sent out to local medical personnel, which responds and retrieves the baby from the climate-controlled box via a door on the inside. Shnepp said the box has an initial start-up cost of $20,000 and an annual maintenance cost of $300. She said she believes there will be no problem raising private donations to pay for all of it. She said the fire department and others are on board with the project, and while the council members didn’t vote on the issue, they addressed several aspects of the project, such as how the town might be prepared to address any funding shortfall. Councilman Bob Jones expressed his view: “If you can save one infant it would be more more than worth it.” Schnepp asked that the town attorney look over the paperwork involved with the arrangement through the national Safe Have Baby Boxes organization, and attorney Jeff Graham indicated that he had done so elsewhere before and that he didn’t expect there would be any issues.