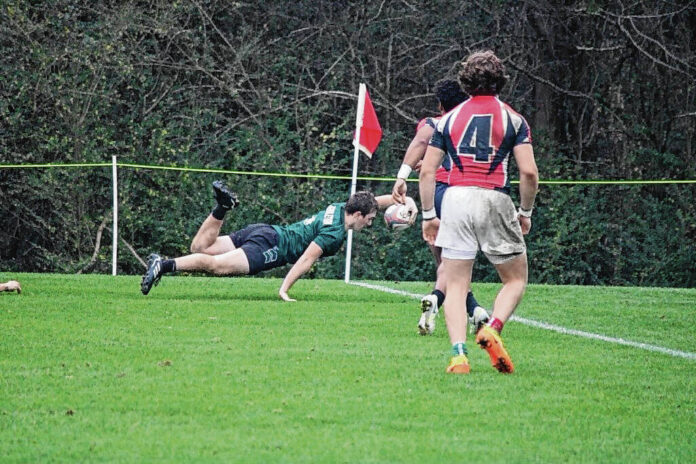 By Brady Extin | The Times-Post

They returned home to Pendleton with some new hardware.

“Greer is a really cool, small little town, almost similar to Pendleton. They have a really cool downtown area that our hotel was next to, so they got to experience that in the evening. It’s some really nice, well-kept fields that could rival some college and professional teams’ fields,” head coach Austin Robbins said. “The players all seemed to have a really good time. 7s is a little bit of a faster paced game, so we were kind of doing hockey-style line changes with our players to get guys in and out as quickly as possible. In our normal 15s matches, we have 60 minutes with 15 kids on the field. With 7s, it’s a 14-minute game with just seven players on the field at a time.”

In the gold division, Pendleton went 5-1 on the weekend to earn the championship.

Entering Sunday 3-0, they picked up where they left off, defeating Wando 40-0.

In the final two matches of the tournament, they faced the same opponent — Raptors Rugby.

In the first battle, Pendleton fell 17-0, but with both teams seeded in the top two spots, the two teams faced off again in the championship match.

“In the first match, I think we struggled to get focused mentally right before it because we already knew that we would be in the championship game because we had won our three prior matches,” Robbins said. “Once we locked in, we were kind of able to keep them out, but they put in some early tries against us.”

Not only a rematch from earlier in the day, but also a rematch of the 2021 championship match where Pendleton lost, this time, it was all Pendleton in a 31-0 rout.

“One of our benefits was definitely our depth. With 15 players on our gold side, we were able to get more fresh legs against them in the second match. We had trust in any of our 15 players to be on the field,” Robbins said. “We started a little bit of a down-subbed lineup in the championship match just to get a little bit of extra rest to our regular starters, who then came on to finish off the match.

“That raptors team had 11 players, so a lot of their guys were tired from having to play almost all the matches the entire tournament, where our guys were playing somewhere between five minutes to a full match just depending on how we were rotating them out.”

That depth, According to Robbins, was also the difference as opposed to the championship loss the year prior.

“It was definitely the depth. They only had 17 total players last year between the two teams, so a lot of the guys were really tired from having to play full matches. Just having those fresh legs this year helped,” Robbins said. “Our practice sessions worked really well this year too because we were able to run full 7-on-7 scrimmages and not have to worry about getting guys rest at practice because we could just pull guys out and get a brand-new guy in.”

Leading the way for Pendleton in scoring over the weekend was Nick Trout with 42 points scored.

As a team, Pendleton had three shutouts, and outscored opponents 148-32 in total throughout the tournament.

Pendleton will now shift its focus over to 15s, as it resumes practices as school is back in session.

While the schedule has yet to be finalized, Robbins anticipates the team’s next match to be near the end of February or early March.

During the first week of the Pendleton Heights spring break, the team plans to go on a southern tour, playing matches in New Orleans, Memphis and Nashville.