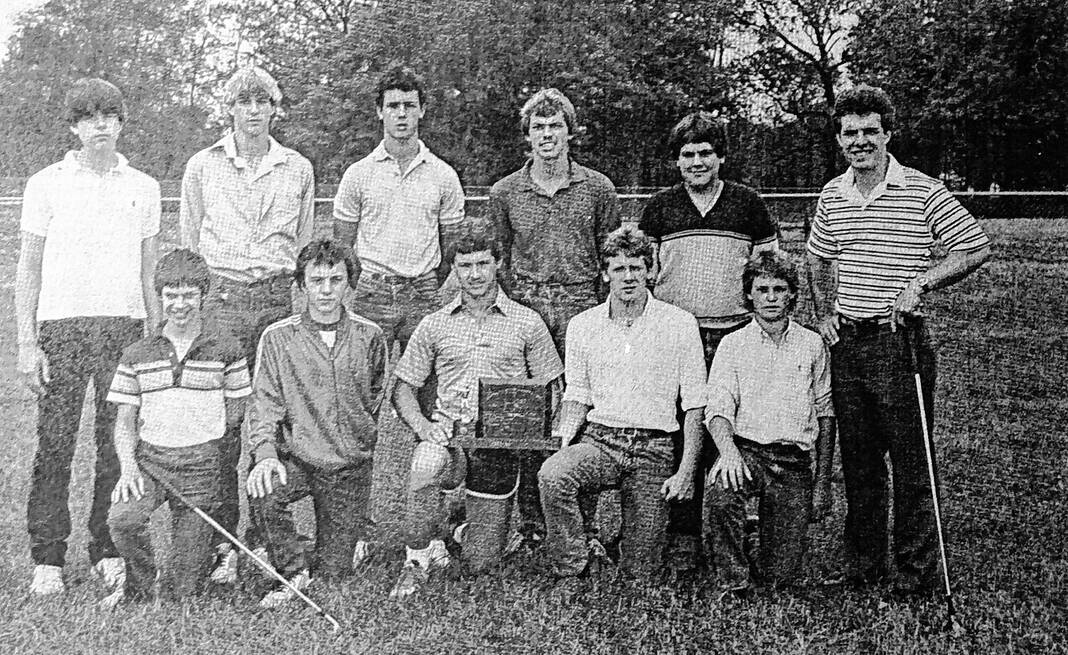 On the morning of Jan. 20, 1985. Ronald Reagan was quietly sworn in for his second term as president of the United States. He won 68% of the popular vote, while winning 49 states. One week later, a group of singers got together and set a charity single recording, “We Are the World.” For a few weeks, America was at peace.

Mikhail Gorbachev, general secretary of the Communist Party of the Soviet Union, who would play a part in breaking up the Soviet Union, improved his country’s relationship with the United States. The Berlin Wall would later come down, with President Reagan’s insistence.

A guy named William J. Schroeder became the first artificial heart patient to leave the hospital. In May 1985, an explosive sent by the Unabomber injured John Hauser at University of California, Berkeley. In a later incident that occured on June 13, the police of Auburn, Washington defused another Unabomber bomb sent to Boeing Airlines.

Young driver Danny Sullivan beat veteran Mario Andretti to win the 1985 Indianapolis 500. John Hendricks launched the Discovery Channel in the United States. The movie “Back to the Future” opened in theaters across America and ended up being the most successful, grossing higher than all other movies released during the year. The first “smoking ban for restaurants in the United States passed in Aspen, Colorado.

Pete Rose became the all-time hit leader in Major League Baseball, with his 4,192nd career hit at Riverfront Stadium in Cincinnati. And Ford Motor Co. released the Taurus and Mercury Sable for sale to the public. Neither car is in production today.

Back at the Brockway Golf Club, there was a lot of youth activity on the golf course. There were also 16 players traveling to other county golf courses playing inter-club matches. The summer had been a very productive year for junior golfers at Brockway. In addition, several boys played in tournaments at Bloomington, Leesburg and Crawfordsville. Richie Chance, Troy Jones, Chad Renbarger and Greg Swinford placed and won in these events.

In October 1985, the State Accreditation and Facility Planning Commission had given approval for a two-site building program for the West Central Community School Corp. Additions and renovations at the Lapel Building (K-12), original constructed in 1954, and at the Frankton High School (9-12), originally constructed in 1958. These buildings of the 1950s era was scheduled for upgrades to accommodate contemporary educational patterns. Additions and renovations at Lapel would include new windows, masonry repair, new temperature control, more electrical outlets, and an alarm communication system. The floors and ceilings would also be upgraded.

The Uptown Café opened its doors for business. Doug and Gloria Stalker were the owners and operators. Don Snyder, a town of Lapel employee, was seriously injured at the Lapel Treatment Plant, when a wood chisel he was using slipped and penetrated his right arm, severing his radial artery, two tendons and two nerves. Quick thinking by Bob Neal resulted in a trip to Riverview Hospital’s Emergency Room. He was stabilized and transferred to St. Vincent’s Hospital for special surgery.

In November 1985, there was an open house at the new Community Hospital, in Anderson. People were invited to the event on Sunday, Nov. 10, 1985. Lapel was notified it would be losing its railroad line. Conrail claimed it was abandoning the tracks between Lapel and Anderson because of insufficient revenue. Conrail estimated the value of the 9 miles of track at $382,000. There were two interested buyers at that time.

From January 1967 until December 1967 there were 83 more babies born in the Stoney Creek Township area. There were 33 girls and 50 boys. The destiny of these eighty-three babies was to grow up and become students of the Lapel High School Class of 1985.

Many students were experiencing their first time having a job. Some worked at the fast-food restaurants. Others worked at variety stores or on farms. Either way, they were saving for a range of things, from college to buying a car.

The baseball team was toss-up in ’85. The team finished with a 14-16 win-loss record. Much of the load was carried by Jeff Bennett and David Dock. The Lapel Post reported Jeff Benefiel, son of Terry and Judy Benefiel, was being scouted as a major league baseball prospect. Jeff graduated from Lapel High School in 1983. The girls cross country team went 3-6. The boys cross country team was much better. Coach David Fuqua showed good results with his team. In golf, the team was led by Doug Wood and Phil Snyder. It was a building year for golf. Tim Sears took over as golf coach. He was also golf pro at Idlewold for many years. Tim took his responsibilities serious. This writer has known him for several years.

The football had a positive year, finishing 6-3. The girls volleyball team had a great year finishing the season 15-11. It was the first volleyball team in the school’s history to make it to the final game of the sectional.

In boys basketball, the record did not reflect the season. Again, there were games when one basket would have won the game. Their highlite was against Triton Central, the team won the game giving Coach Hunter his 300th win as a coach.

In wrestling, this year’s team tied the school record for wins and set a school record by winning four meets in a row. Ray Coggins led the team in maneuver points. Todd Wood won second place at the sectional. Mike Taylor also won in his first year of wrestling, when he won the BBRC Championship in the 185-pounds weight class, plus first in the Madison County Tournament, first in sectional and placed fourth in the regionals.

We cannot forget our cheerleaders during 1984-85. They always tried to get the fans involved in every game/event. The varsity cheerleaders were Trish Muse, Analisa Oleksy, Amy Husted, Jeri Campbell and Stacy Wright. The mascot for 1985 was Stephanie Upton.

Learning practical skills is very important for the future of Lapel High School students. Everyone does not need to have a college degree to earn a respectable wage in America. Plumbers and electricians are good examples of this trade skill. LHS offers classes on several job skills. They teach how food is produced and marketed. They teach about the hundreds of occupations available in the agricultural business. Plastics is replacing glass in many areas. Communication and computers have placed more importance in drafting. Vocational agriculture is designed to develop a solid background for the future farmers. Many students are taking advantage of these fields. Some classes, such as leather-crafting and woodworking, may evolve into good hobbies.

Teachers are much more than teachers. At times they can be counselors, when other times they organize special events. They must also function as security, preventing aggression and encouraging participation. There are other times when they dig into their own pocket and purchase items not covered in the budget. They guide students in the direction needed to accomplish their goal. It takes a special person to be a successful teacher. We are very fortunate that people step forward and take this important responsibility. They influence students’ lives!