PENDLETON — Milissa Farmer of Greenfield said it was a “spur of the moment” decision to drive to Pendleton late Friday afternoon with her family to partake in the festivities going on.
For Matt and Sheri Rice of Noblesville, it was a planned trip to Pendleton after seeing an advertising banner across State Street during a previous road trip.
The Farmers and the Rices were among thousands of visitors to town during several events last week, helping to contribute to successes all around.
“It went very well. It was a good turnout; in fact, it was record turnout,” said Dusten Tryon, organizer of the two-day Pendleton Fall Creek Heritage Fair in Falls Park on Friday and Saturday. “We had around 12,000 people there over the weekend.”
Tryon said the previous record was about 9,000 visitors.

The Heritage Fair — which included more than a hundred vendors, live entertainment and more — is organized by Friends of Falls Park, which supports the park in a variety of ways.
A final tally of funds raised had not been completed as of Tuesday, but a $5 per vehicle parking donation this year generated $7,500 alone, a figure that doesn’t include other revenue from things such as booth rentals.
Last year the total amount raised for the park was about $5,000, Tryon said.
This year’s funds will be used to install a stamped concrete patio behind the community building, a project ready to go in the next few weeks, he said.

Fall Festival, organized by Pendleton Business Association, took place during the same two days and offered a similar number of vendors, as well as a children’s play area, a scarecrow contest for businesses and more.
“I thought everything went so well,” organizer Niki Brown said. “One, the weather was absolutely beautiful. (With that), people want to come out to shop. Two, the vendors are happy because they don’t have to deal with inclement weather.

“Saturday the attendance was just incredible,” she said. “There were times … it was just a sea of people.”
Businesses and vendors “had a great day,” she said, noting one food vendor served 900 customers and Kiwanis sold 2,000 K-Burgers.

Saturday’s Friends of the Pendleton Community Library Lucky Duck Race in Falls Park raised a record amount this year, estimated at $10,000 as of press time. Kenny Humphrey | For The Times-Post

“Eight hundred and eighty-eight total ducks; 61 of those were sponsor ducks,” she said. Sponsor ducks represent a donation of $100 or more. Regular ducks cost $5.
“We think we raised nearly $10,000,” Bill said.
Those funds help pay for a variety of library programs, such as the summer reading.
“It ought to make an impact this year,” Bill said, noting the inaugural event in 2014 raised $550. That figure grew to $7,000 last year.
“I think we’re just a community that loves our library,” Bill said.
Winners from the main race were Dan Oliver, first; Felicity Collins, second; Bill Herridge, third; and Landon Jones, last duck out. Prizes (a mix of gift cards and cash) were $150, $100, $75 and $50, respectively.
My Time Fitness won the sponsor race. Its name will be on a plaque at the library, and it will name the mascot duck for 2023.
Final attendance and fundraising numbers for ParkFest hadn’t been tallied as of press time, Bill said, stating the crowd was bigger than last year.
ParkFest is a concert fundraiser for the park that featured the band Stella Luna and the Satellites. 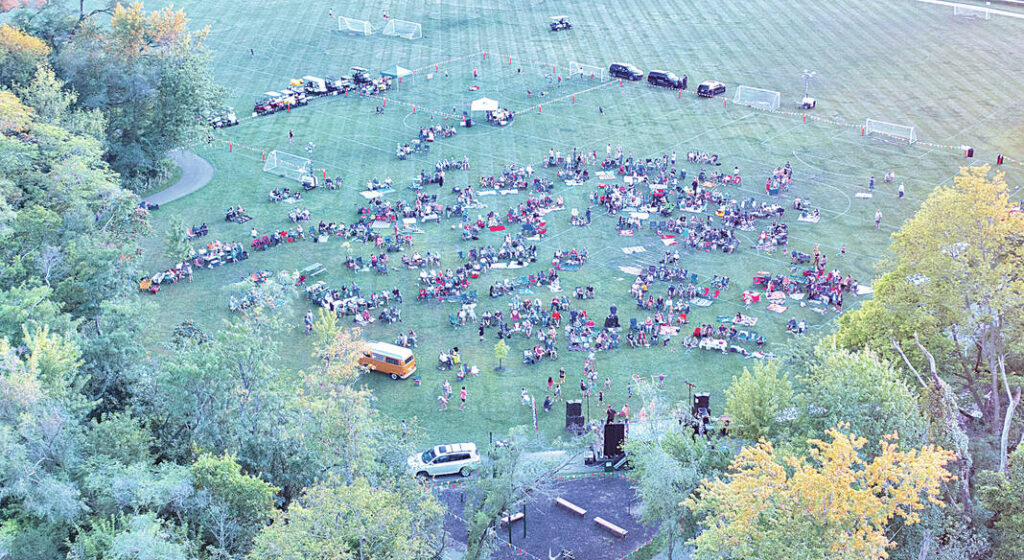 The crowd at ParkFest 2022 at Barnhart Field in Falls Park on Thursday, Sept. 8. Kenny Humphrey | For The Times-Post

It also included Chalk the Walk, a sidewalk art contest, and a Bring Your Own Picnic decorating contest; both had great participation, Bill said.
Madalyn Harris placed first in Chalk the Walk; Marissa Milliken placed second.
Suzie Pierce, president of Spring Valley Quilt Guild, said the 41st annual Quilts in the Park fundraiser for Pendleton Historical Museum was similar to 2021’s.
“It went very well. We had over 300 people come, and we’ll be giving $3,000 to the museum,” Pierce said.
The amount was derived from $5 door donations during the Thursday through Sunday event and a donation from the guild.
A raffle quilt was won by Peggy Sanqunetti.