By Sue Hughes | For The Times-Post

PENDLETON — A chance trip to McDonald’s more than a decade ago set Kellie Borgman and Angie Webster on an adventure and a cause that is still a big part of their lives.

They were both at the Pendleton McDonald’s when someone dumped a pregnant bit bull in the parking lot. Although Borgman and Webster didn’t know each other very well, they worked together to capture the dog. While they were able to get that dog into a no-kill shelter, they talked about the fact that Pendleton did not have a dog rescue plan.

Friends For Paws was created in 2011 and became a not-for-profit organization in 2012. At the time of its startup, it had three board members; it now has seven. It has many more volunteers who help meet the group’s mission.

The main goal of Friends for Paws is to rescue animals and foster them until they can find a permanent home or until their family comes for them.

Borgman, who is board president, is on call 24 hours a day.

It isn’t unusual to be called out in the middle of the night to rescue an animal off the interstate.

Borgman said although dogs and cats are what they mainly rescue, there have been some not-so-common rescues.

“We have saved chickens and raccoons,” Borgman said.

After the tornado in 2019, Friends For Paws helped capture a baby owl.

Any animal that is not considered domestic is turned over to Indiana Department of Natural Resources.

The organization works with Madison County Emergency Management Agency during times of natural disasters. Pet Disaster Relief has a trailer that EMA deploys when it is needed.

More routinely, however, Friends For Paws works with Pendleton Police Department to capture dogs that might be aggressive or hurt, she said.

“We chased a dog from Pendleton to Mt. Vernon High School one time,” Borgman said.

After Anderson stopped serving Pendleton, he said, Friends For Paws “stepped up to volunteer. … they’ve been an asset ever since.

“Having them as a resource is a definite advantage for us. We would literally just have loose animals running everywhere,” he said. “The feral cat population could possibly explode.”

PPD Captain Lucas Traylor and his wife, Kara, are both Friends For Paws board members.

Traylor said he and the other board members and volunteers work together to ensure someone is available to respond when there’s a need.

“Priority No. 1 is Pendleton,” he said, however the group serves other parts of southern Madison County, too.

“Pretty much everybody involved, you want to help out any animal you can,” Traylor said.

“The shelter tries to do as much as we can with the resources that we have, which are limited.”

One thing the public can do to help everyone is to have their pets tagged and microchipped, Farrer and Traylor stressed. This can help locate owners quickly and end up with a better outcome.

Before Friends For Paws puts an animal up for adoption, it is spayed or neutered and given all its shots.

“We just try to support them when we can,” said Andrea McClure, registered veterinary technician and office manager at Pendleton Veterinary Clinic.

The clinic provides Friends For Paws services at a reduced cost, she said.

Lately, they’ve been helping with one or two animals a week, McClure said, but that fluctuates quite a bit.

As far as she knows, Friends For Paws is the only place in town to call when there’s an issue with a loose animal, McClure said.

“If they didn’t exist, we’d probably see a lot more stray animals in the area that are sickly and endangering our pets, because you’re going to have animals running rampant and carrying diseases,” McClure said. “I think it is a needed service.”

Borgman said there are cases when rescued animals can’t be saved. Occasionally an animal has been so mistreated or is in such rough shape it cannot be helped.

And not all dogs or cats who survive are adopted out.

Lexi, a 3-year-old German Shepherd, needs double hip and double knee replacement. She has stayed the longest with Borgman because no one wants her.

Borgman said the dogs and cats mostly get along well and she doesn’t have any problems.

She did have a dog that turned on her once and cornered her. She was able to free herself from that situation, but the dog was determined to be too ill to save.

Many times, when Borgman goes out to rescue animals, her 15-year-old son Riley goes along to help.

He also helps walk the dogs and feed them.

Borgman and Webster (who also serves as the organization’s treasurer) said there is real need for the service in Pendleton.

In addition to finding homes for the cats and dogs, they educate future owners on being responsible pet owners.

There is a process potential new owners must go through, including a background check. There’s a cost, too: $50 for kittens and $100 for dogs. 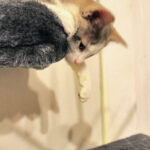 Cinnamon, a 12-week-old male domestic short-haired cat, is a rescue animal who had been dumped in a field with four other siblings and brought to Friends For Paws by a farmer.

In addition to helping find new homes for animals, the organization also offers microchipping services to the public for $25.

As Pendleton has grown, Friends For Paws operations have increased, and Borgman said the organization is also looking for a new home for itself; somewhere people can come and see the dogs and cats available for adoption.

Currently, rescue animals are kept at Borgman’s home or in the homes of a network of other people who have agreed to foster animals.

Going forward, the group also would love to have more volunteers.

Currently, there are about 15 people who are very active.

Some of them foster, but not all can do that. They have one volunteer who only transports.

Volunteers are trained before they interact with the dogs and cats.

There are other ways people can help. Friends For Paws takes donations for its pet pantry. Anything not used is given to pet owners who cannot afford to buy pet necessities.

In the past, Friends For Paws has relied on an annual fundraiser and other donations from the community. There are plans to do more fundraisers in the near future.

“We have a great team helping us,” Borgman said.

Board members in addition to Borgman, Webster and the Traylors are Adrienne Vollweiler, Joey Majors and Patty Lovins.

“We need the town, and they need us,” Borgman said. “We want to make a difference in the community.”

A challenge now is how quickly Pendleton is growing.

“The town is twice the size it was when we started; we want to continue, but we need more funds and time,” she said.

Webster added, “My concern is the way the town has grown; it has put a strain on us as well as other shelters.”

Borgman plans to continue as long as she is able.

She said every time she thinks about quitting, another dog or cat shows up that needs help.

“It’s the most rewarding thing I have ever done,” Borgman said.