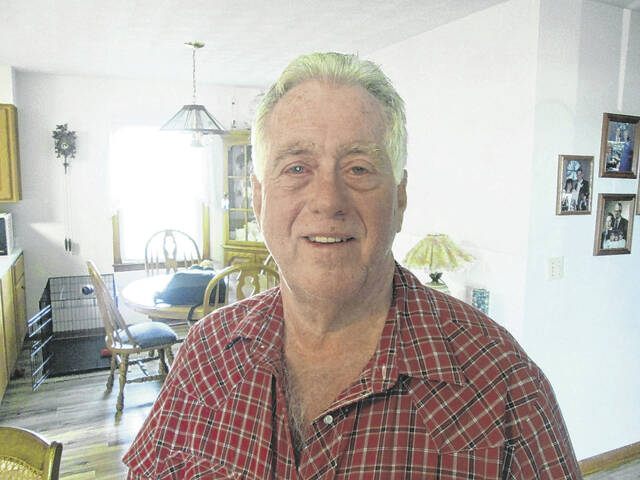 When most people drive down the road and see farm fields on each side, all they see are corn and beans.

Few realize under those crops valuable coins and artifacts are hidden.

A hundred years or before, that field could have been the site of a thriving homestead.

A friend of mine, Brant Jones, spends most of his free time searching these fields with his metal detector.

First, he logs onto his computer and goes to www.historicmapworks.com.

Then he types in his state, county and township.

This brings up several choices of maps. He clicks on the oldest one listed and the screen will show his area. The small, black squares are houses that were standing when the map was current.

It also shows buildings with a cross on top (churches), structures with windows (usually schools), toll houses, roads and much more information.

Brant picks a field with an old house or school, drives to the area indicated on the map, and knocks on the door of the closest house and asks if they know who owns the farm field. When he finds the owner, he asks for permission to metal detect on his property.

Of course, he can only detect there before the crops are planted in the spring and after they are picked in the fall.

Brant uses a Minelab Equinox 800, but any detector will find lost or hidden items in these locations. Because of his extensive research and the amount of time spent detecting, he seems to find more and better targets in the ground than most others.

While Indiana was not known for a lot of Civil War battles, soldiers from the Hoosier state returned from the war still wearing their uniforms. They continued to wear these clothes around the farm and buttons were lost. Some men returned home with their muzzleloaders and hunted with them. Brant finds these lost buttons and lead bullets. Other Civil War artifacts are also lost in Indiana fields.

He found an Andrew Jackson inauguration button on one of his outings. His favorite find was an Abraham Lincoln, 1864 presidential campaign button.

Trade tokens from various businesses that were common over a century ago are frequent additions to his coin pouch. Many assorted coins from the 1800s see the light of day to be added to Brant’s collection.

Not all of his finds remain in his possession.

One time, he found a 1924 class ring in a field. After much research, he was able to locate the owner of the ring who had passed long ago.

More research led to a meeting with the 83 year old granddaughter of the ring owner and Brant was able to return her grandfather’s ring to her.

Almost a year ago, he had foot surgery and has been required to use a knee scooter to keep his foot off the ground. But that didn’t stop him from metal detecting. He still is able to get out in the fields if they aren’t too muddy. He hopes to be able to retire his scooter soon and walk without assistance again.

Just a few weeks ago, Brant found another class ring while out detecting. It was from 1938. He spent days researching his find, checking schools, local government offices and other resources.

Dozens of phone calls finally brought him to a lady who had a yearbook from the desired school. She even said she knew the girl who had lost the ring. The name made the research easier

He was able to contact the brother of the ring owner. He gave Brant the contact information of the lady’s daughter. She was invited to the local metal detector club meeting recently where he presented her with her mother’s lost ring.

Just recently, he discovered a coin that is on probably every metal detector owner’s bucket list.

He was hunting an Indiana farm field, on his knee scooter, when his detector sounded off. He looked down and saw a coin on top of the ground. It was an 1877 Indian head penny, the most sought after coin in the series.

The date was very easy to read, and the coin was barely worn.

He is having it professionally cleaned and graded. Early estimates place it worth more than $1,200.

Susie and I also search old house sites. If any of my readers know where a farm field had a house standing there more than 100 years ago, and can give us permission to metal detect there, please contact me.

We have extra detectors and would be glad to teach anyone how to learn the hobby. Maybe you can find something valuable hidden under the dirt of your own property.

Can’t we all just get along about hot dogs

My seventh grade English teacher was a terror